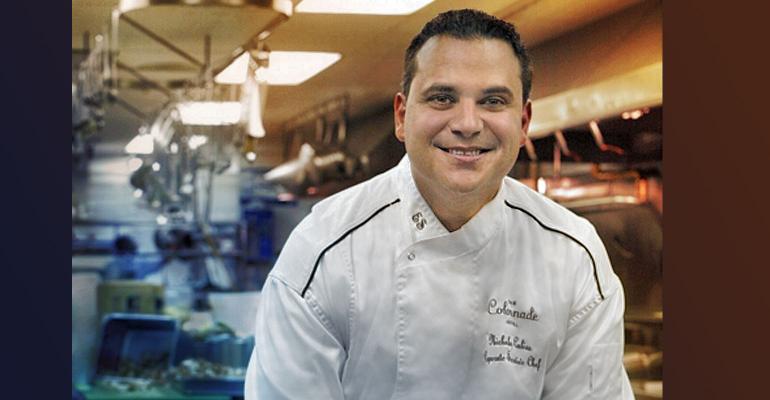 Q&A with Chef Nicholas Calias, from Boston’s Colonnade Hotel: “If we can’t make banquet food as good as restaurant food, it doesn’t go on the menu.”

Foodies know award-winning chef Nicholas Calias, CEC, CCA [Certified Executive Chef, Certified Culinary Administrator] for his classic French cooking at the Colonnade Hotel’s Brasserie Jo in Boston and his involvement in New England’s culinary scene, including spearheading the annual RoofTop Chef Series for No Kid Hungry, a cookout-style fundraiser. What also sets this star hotel chef apart is his reputation for raising the bar for banquet food. Chef Nick has led the culinary operations at the 285-room Colonnade as director of F&B operations/corporate executive chef for more than a decade. Before that, he was an executive chef with the Westin Stamford Hotel and with Starwood Hotels and Resorts, where his responsibilities included managing banquet food service for up to 5,000 people. He spoke with contributing writer Regina Baraban about the new generation of banquet food that never has to be boring.

Group catering and banquet food service pays the bills—it’s where you bring in your income from F&B. Nowadays, with rising labor costs and food costs, the profitability margin has decreased—but this doesn’t mean that hotels should decrease quality with things like pre-manufactured food to lower the costs. Our approach is profitable because people are wowed by the food and want to come back. It’s given us a huge social media following.

How, specifically, do you bring restaurant-quality food to a banquet menu?
I don’t care if we are serving five people or 5,000, we make everything from scratch, including sauces, hors d’oeuvres, and salads. Cheeses served at a reception are plated individually with their own garnish, with accompaniments such as crackers made from scratch and white wine lollipops.

We never use hot boxes to hold food, and I don’t allow tray service. Everything is served by hand, just like in restaurants. There’s no fluff on the plate, and we don’t douse the food with sauce—we want people to look at the table and say that the food looks amazing.

It’s all about changing people’s perceptions of banquet food as well as changing kitchen techniques.

You must have a big staff.
Not really. I have a kitchen staff of three people and a banquet chef who prepare plated dinners for up to 400, and receptions for up to 600 (plus a pastry chef). It’s a lot more work than traditional banquet prep, but we’re motivated because we take pride in our food.

Of course it’s going to cost a little more, but I’m not the most expensive in the city.

What do you see as the newest and most interesting food trends?
Today, everyone wants to be a chef, and to talk about what they ate. People want to learn more about the food, which dictates how we design our menus. They ask to take the menus home! Social media is a huge piece of this, too, and we know that how we put our food on the table is important for a good photo.

In the hotel world, farm to table and small plates continue to be ongoing trends. People want variety and individual choice at receptions and breaks. I’ve moved away from traditional banquet tables in favor of modular, multitiered “Mogogo” tables that allow us to do creative things with small plate food display.

We create a new banquet menu every year, to keep the choices fresh and up to date. For example, we recently added rice bowls to the buffet menu.

Tell me about a creative challenge you’ve had for a large group banquet.
At one of my previous properties, I was given a “Wizard of Oz” theme for a dinner for 2,500 Starwood executives. What do you eat in Oz? We filled little tin oilcans with flavored oils to evoke the Tin Man and served them with emerald green salads. A corn bisque and corn Johnnycakes referenced the Scarecrow. We wrapped tenderloins with shredded phyllo puffed up like a lion’s mane. For dessert, we served a white chocolate slipper filled with raspberry mousse and covered with a ruby-red glaze, and cheesecake lollipops.

What is your relationship with the meeting planners who bring groups to your hotel?
I may not be your typical executive chef, but I always want meeting planners to have a connection with me, so that they feel confident everything is going to be great at their meals and breaks. No one is allowed to create or approve a menu without my okay.