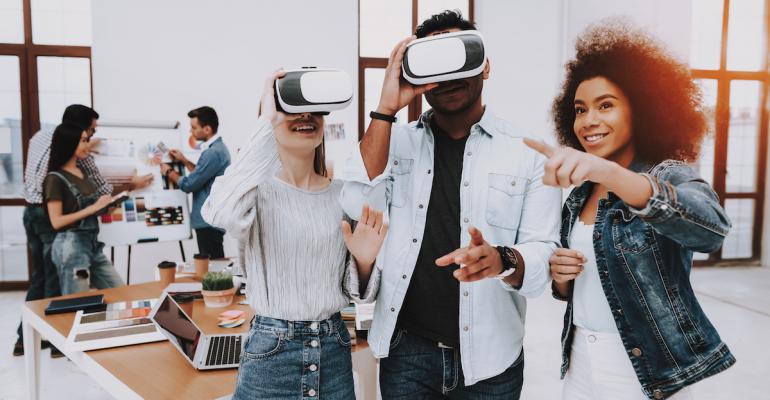 Get ready: VR will change how you engage, educate, and sell to your attendees.

The world of entertainment has been thrilling audiences with augmented and virtual reality for two decades, from early theme park “dark” rides like Spiderman’s journey up and down buildings at Universal Studios, one of the first rides requiring 3-D glasses, to the VOID’s Star Wars, Secrets of the Empire immersive virtual reality experience. For meeting planners without the kind of budget available to the makers of roller coasters and video games, VR may not seem like a viable tool to engage and educate event attendees.

According to a recent webinar, however, planners should rethink that idea, and consider the ways that incorporating this technology in live events will benefit attendees without breaking the bank. Presenters from Sector 5 Digital, Jeff Meisner, CEO, and Cameron Ayres, director of innovation, began the webinar, hosted by app-developer Pathable, by defining some terms.

Virtual Reality   The three-dimensional simulation of an environment that creates an immersive, experience for the participant. An example of this is the holodeck from “Star Trek.”

Augmented Reality   This is when real life is enhanced with a computer-generated simulation, for example, a Google Glass user can see a sign in Japanese and have the smart glasses display it in English.

Sector 5 Digital has created VR and AR content for clients including American Airlines, the U.S. Army, and Universal Studios. All almost certainly have much larger budgets than an association annual meeting, but in a case study of American Airlines, Ayres showed how the company gradually developed the VR project and used it for different purposes. The company worked with the airline for more than eight years to build up digital assets so that they now have an immersive virtual environment for salespeople to demonstrate first-class flights. American Airlines has also partnered with several companies to produce other applications for the technology. It is using VR to train new employees, including flight attendants getting used to new aircraft and learning new procedures, which is helping to make the training process safer and more efficient. Attendants no longer need access to the actual aircraft until the final stage of training, when they will already have muscle memory for opening doors and using emergency equipment because they trained in an immersive environment.  For American Airlines passengers, there is an AR app that shows routes around airports to get them to gates, food outlets, and lounges.

Once digital content is in place, it can be used for VR applications but also for every other kind of marketing or educational purpose that requires video. For this reason, Ayres suggests that event planners should not have to shoulder the burden of paying for VR by themselves. Every department can make use of the technology, from sales and training to marketing and event planning. Meisner advised that a ballpark figure for a small virtual-reality project might begin around $20,000 but a truly immersive one starts at $50,000.

Planners should think about how they would like to use the technology: One way would be to show association members the possible applications within their industry. VR is being used to train surgeons, aircraft engineers, and professionals who require hours of training but rarely have the opportunity to practice emergency situations in real life. VR can be the ultimate trade show sales tool. Harris described a booth at CES 2018 where Sector 5 Digital created a VR experience for visitors sitting in a physical mockup of Bell Helicopter’s Air Taxi. “Passengers” inside the craft could see their hands using the touchscreen entertainment controls and experience the flight.  This type of experience can engage prospective purchasers at product launches more than passively watching a video. This was certainly true for Cessna, which employed Sector 5 Digital to create new interiors for one of its planes and then allowed potential customers to sit in the aircraft during a 45-city roadshow and, wearing a 3D helmet, see how the interior of the plane could be customized for their needs. Harris warned that for this type of truly immersive experience, planners need to have control over the lighting and sound in the proposed environment, so a physical mockup is essential on the trade show floor but not necessarily needed in a small breakout room.

Meisner suggests that even if you have a restricted budget start thinking ahead.

1.     Any video you commission can be filmed in 3-D, even if its immediate use will be in 2-D. Once you have it, you can integrate it into projects down the road.

2.     Discuss applications you think VR would be helpful for with your board so that they get used to the idea.

3.     Reach out to other departments you think might benefit from the technology, such as sales or HR. A shared budget might make it more achievable.

4.     Consider the ROI of introducing a VR element. Seven thousand attendees experienced the Air Taxi at CES 2018, and subsequently shared the experience on social media two million times. That is a huge marketing gain.

5.     Get a sponsor for a VR experience. If you are using the technology to make your educational efforts more engaging, your audience will win and the sponsor will be seen as forward thinking.

Meisner ended the webinar by calling on planners to prepare for VR technology. He said, “Remember when putting someone onstage with a mic and a PowerPoint on a screen was considered high-tech? This is going to happen sooner or later, so start investing some thought in it now.”