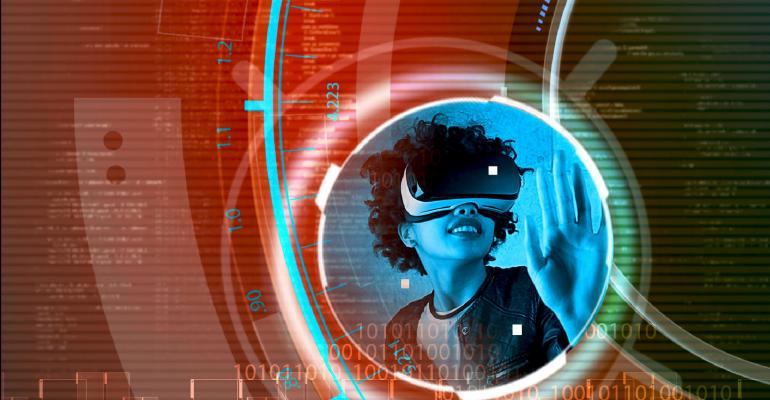 Teaching practical skills with PowerPoint is tricky. How would you like to take your engineers out to an aircraft hangar to show them the latest jet engine? Or let your attendees drive a new car at its launch party? (Yes, even the ones who drank the free champagne.) Or let a hall full of doctors participate in a surgery? Before you start worrying about cleaning up blood from a ballroom carpet, we’re talking about virtual reality, where attendees can explore the intricacies of surgery, or check out a jet engine, or drive a car, while immersed in a totally safe environment. Participants choose the viewpoint; for example, in a surgery, they can be the surgeon, the theater nurse, or the anesthesiologist. This technology is available and being used to share new surgical techniques and devices at medical and pharmaceutical conferences in Europe.

Virtual reality has been shown to boost retention rates significantly over traditional educational methods, not to mention keeping learners (and patients) safe until they have mastered the skill.

Here’s how one company is putting the attendee into the presentation.

London-based Medical Realities is a medical technology and training company with a virtual reality platform that can livestream 3D, high definition, multi-camera feeds of surgeries to an event. In order for meeting attendees to be immersed in the procedure, they need a smartphone, Wi-Fi, and a VR headset. The content is streamed from the VR platform to the event venue, and then each attendee streams the content using their phone, viewing it through a VR headset.

Medical Realities has a library of filmed surgeries, edited for length and annotated with text or animations to clarify parts of the surgery, and expects to have more than 100 different surgeries on file by the end of the year. Steve Dann, co-founder and CEO of the company, says only one or two patients declined the request to film their procedures. He says, “They see it has giving something back because others can learn from it.” The company charges a fee to “rent” the virtual surgery and stream it to the conference, and attendees also have the option to set up an account and watch the surgery multiple times to learn a particular technique. The experience is effective at sharing breakthrough techniques at international conferences, so that physicians can update skills and/or critique different methods. With enough lead time and budget, planners can also commission new virtual reality training presentations, such as for a new medical device a company is bringing to market. By experiencing the surgery together, attendees can ask questions, give feedback, and share insights.

The technology has been used in this capacity occasionally over the past two years, but it is only now becoming more popular. In November 2017, around 200 doctors and other medical personnel at the GIANT (Global Innovations and New Technologies) Health Event in London’s Old Truman Brewery viewed a 30-minute surgery. During the Barts X Medicine Program in December, medical students were able to watch a laparoscopic gallbladder surgery. In that case, participants were asked questions before and after and found significantly better rates of understanding than for a typical lecture. Dann says that virtual reality training methods help understanding and information retention. “It’s a more compelling experience than passively viewing slides or a video, and anecdotally we have found retention rates are over 80 percent.” After the December program, “We were very pleased with the feedback. Nearly 100 percent of the students said they saw this as the future and found the experience unique.” Pre-filmed surgeries can be edited to show what to look for when things go wrong, and they are often shortened as a live audience is unlikely to want to sit through a four-hour operation. The technology can be used for “live” presentations, too. Working with Medical Realities co-founder, Shafi Ahmed, MD, consultant general, laparoscopic, and colorectal surgeon at The Royal London Hospital and St Bartholomew’s Hospital, Dann says, “We did a 360 VR operation at the Tata Memorial Hospital in Mumbai just before Christmas, just to see if it was possible.” The event went well for both the patient and the doctors watching the livestream in a nearby lecture hall.

For planners, VR represents an opportunity to fully engage an audience with the content. Content is the biggest expense, but as more events see the potential for VR presentations, it will become commonplace to commission content for new product launches or education conferences. VR headsets can be rented or bought inexpensively. Dann says Google Cardboard has been used by attendees at Medical Realities events in the past, but even cheaper D.I.Y cardboard kits that retail for a couple of dollars each will work in the short term. Planners thinking about using this technology should note that VR headsets can almost always be branded with the name of the conference, organizations, or sponsor. Dann estimates that Internet access at a modern U.S. conference center should be fast and reliable enough to handle between 250 and 500 users streaming the same surgery, but any more than that and the Wi-Fi may need boosting.

Corbin Ball, an event technology consultant and speaker, says, “This application of virtual reality technology is still in its infancy. It hasn’t hit the mainstream yet, but it is well established for site inspections, room diagramming, and gaming so it won’t be long.” He points out that the NBA is streaming basketball games in virtual reality, so the concept is familiar to many people.