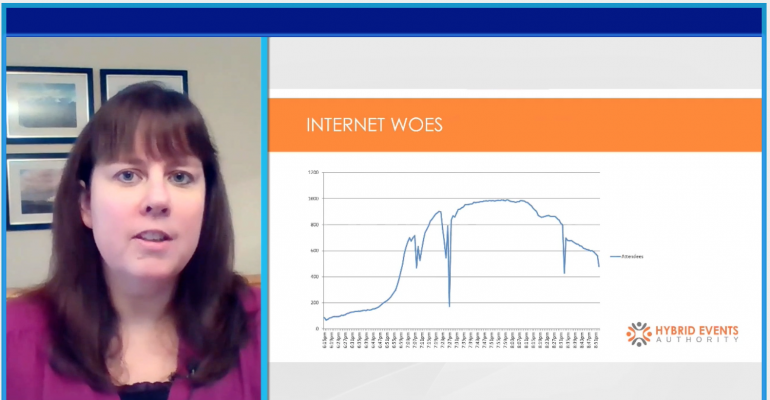 Stephanie Pfeilsticker shares her wisdom on preventing and dealing with failure when planning virtual and hybrid events.

Stephanie Pfeilsticker, a veteran virtual event planner and the founder of Hybrid Events, began her session on MPI’s Virtual Summit by sharing a story about an early failure. She said, “We held an event at a professional baseball stadium, which is an unusual venue to stream from, and we were the first group to stream from there. I worked with the IT department to make sure they could provide the Internet line and provided them with a page of requirements that they needed to supply. At the site visit they said, ‘Yes, of course, we can do that.’”

Pfeilsticker then showed a graph of attendees to the livestream and Internet access (above) with three major jumps and dips from the start of the event at 6.15 p.m. to the 8.50 p.m. end time. She said, “This graph is inversely proportional to my heart rate onsite! Each time we lost Internet, it was a scary experience.”

After the first dip in Internet access, Pfeilsticker called the IT contact she was working with only to find that he had gone home. She said, “This was several years ago and I was still learning what questions to ask. I never even thought to ask if he would leave, I just assumed he would be there.”

At the end of the event, Pfeilsticker found out that the stadium’s IT department had not really understood what she was asking for, so now she makes sure that whoever she is working with can repeat back to her exactly what she needs and why.

Gear Needs
Pfeilsticker said your gear needs are pretty simple. Think about what you need for an in-person event: a screen, projectors, lighting, mics, and cameras if you are doing IMAG on the screens in a larger room. Then add broadband Internet access and a streaming platform. Pfeilsticker shared a MeetingsNet photo of the technical people at a meeting working on sound, video, Webex, someone monitoring the Webcast, someone doing social media. She said, “If the streaming platform vendor is a full-service company, it should be there with you throughout the event.”

Because the audience may be much larger at a virtual event than for an in-person event, planners may feel pressure to spend money on high-end graphics and projections. Pfeilsticker says that whatever works is fine; she used a pinned tablecloth as a projection screen at the baseball stadium event.

Contingency Plan
Pfeilsticker had advice for contingency plans in the event that something goes wrong. She referenced a meeting that took place in New York with about 50 in-person attendees and 600 virtual attendees across several countries. Some of the speakers were from emerging markets, including India, where sometimes unexpected power outages happen. Prior to the event, the company prerecorded all the session speakers and asked people to wear the same clothes that they planned to wear to the live event. During the conference, one speaker did lose power but the organizers were able to swap in the prerecorded video and still provide attendees with the full experience. Pfeilsticker said, “Prerecording is a good thing to have in your back pocket just in case!”

1.     Bandwidth. Ask about speed and reliability specifically at the time of day you will hold your rehearsal and event.

2.     Power Outages. Either at your event or for your remote speaking participants. Is there a backup generator? Can you prerecord in case?

3.     Nontechnical Failures. Is there a stand-in speaker in that location if someone gets sick or should you prerecord the session?

Crisis Preparation
Pfeilsticker said, “I like to put together a crisis plan for each meeting, and I think of all the things that could go wrong. I work with everyone who will be onsite for the meeting and say, ‘OK, if this happens what do we do?’ We go through every possibility until there is agreement on a solution and everyone takes responsibility for what needs to be done.”

She said the exercise is not really about writing down a plan because in a crisis there is rarely time to thumb through a folder and read instructions, although lists of contact information can be useful.  The discussion is more about having your team see what their individual accountability is and knowing the course of action they are responsible for in the event of a particular issue. By discussing the plan at the initial meeting and also at any rehearsals, Pfeilsticker said, “It will be ingrained in their psyches.”

Prewritten Emails
Pfeilsticker mentioned an event where virtual attendees had problems logging in to the livestream and in the middle of absolute chaos, she had to craft an email to 1,500 attendees with specific instructions on how to refresh their screens and access the event using different steps from the original instructions. To avoid a repeat of the experience, Pfeilsticker now prepares ahead of time. “I think of each issue that can happen that would require the notification of the attendees and I write emails to them ahead of time. I copy and paste the contact list for all attendees into the BCC of an email and hold it in my drafts file so that if something happens all I have to do is hit send.”

Fortunately for Pfeilsticker, since she started this practice she has never had to send one of the emails, but, she says, “It feels good having it there!”

Attendee Tech Support
For any livestreaming event, there will always be attendees who have the mute button on and can’t hear anything or some other issue logging in. Typically, if you have a full-support vendor, someone will be onsite monitoring and sending private messages to help. Typically, about 5 percent of attendees will have a problem, and usually it will be in the first few minutes of an event. Because not all attendees reach out to the right person for help, Pfeilsticker writes an FAQ for the IT department and even the reception desk or phone operator of the organization hosting the event in case they get a call asking for help.

The Virtual Emcee
Pfeilsticker has used paid talent as the voice of the event, introducing speakers and asking audience questions, but she says, “Think about the funny guy in accounting! He or she can be good in front of the camera. Presenters who are part of the organization also have more credibility.”

Pfeilsticker warns, “If there is an in-person audience, don’t forget to acknowledge the virtual audience and answer their questions. You need to make them feel just as important as the audience in front of you.”

Budgeting
Pfeilsticker said that 75 to 80 percent of the budget for a virtual event will go to the livestreaming vendor, but broadband costs can sometimes be extra. She also warned of hidden labor costs. For example, camera operators in Las Vegas are paid twice, once to film an event, and once if the event is broadcast, so the fee will be higher than if you just hire them for live IMAG.