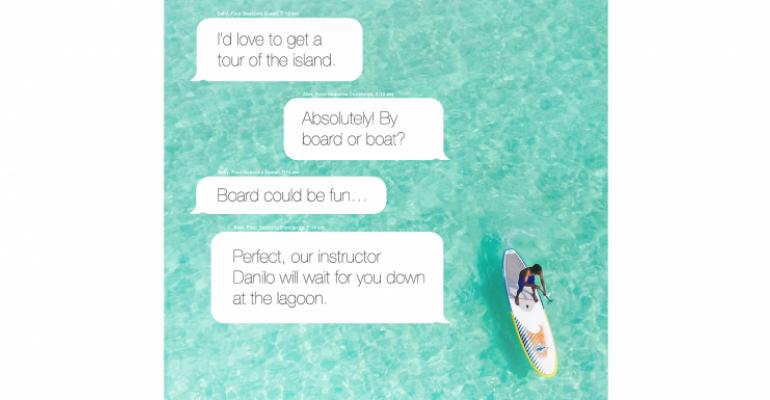 Need to talk to someone at the Four Seasons? No problem. Guests can now use SMS, Facebook Messenger, WeChat, or the Four Seasons App to reach any department at the hotel. The service is available both for the little things, for example, making dinner reservations or getting directions to nearby landmarks, or for emergencies, such as needing a poolside cocktail without having to leave your lounger. Four Seasons Chat is available before and after a guest’s stay, so visitors can book tee times, make menu requests, or change check-in times before arrival.

A Four Seasons spokesperson claims response times for answers and services are in a few minutes, if not seconds, well below the industry average of 12 minutes. Regardless of the response time, sending a text to a human who will make sure the message gets to the right place, rather than working through a phone menu to find the right department and perhaps having to leave a message, definitely frees up busy planners to focus on attendees. And there is no pressing 1 for English, 2 for Spanish; there is an instantaneous translation service available for more than 100 languages.

The Four Seasons believes the feature will be especially useful during meetings, when flagging down a banquet captain or other hotel staff member would be disruptive, but a quick chat message will alert the hotel that something needs to be attended to, from food to room temperature and schedule changes. Meeting attendees can use the feature to get alerts when guest rooms are ready, and to order luggage or car pickup, dinner reservations, and check out. Accidentally left a “Do Not Disturb” sign on the door? No problem, you can use the Chat feature to send housekeeping to the room anyway. In a pilot program, Chat was found to increase guest engagement twice as often as the industry average, and guests reported a high level of satisfaction with the feature.

Christian Clerc, president of Worldwide Operations, Four Seasons Hotels, said, “Human connection may be the single most important element of the Four Seasons guest experience. There are no chatbots here.”

Four Seasons Chat is currently available in 67 hotels, 34 of which are in the U.S.