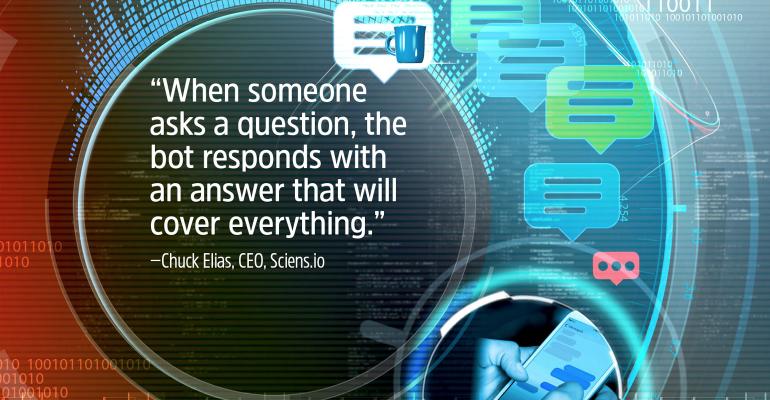 Let’s Talk Chatbots: Why Your Event Needs a Digital Assistant

MeetingsNet's March cover story on technology shows how chatbots can improve the attendee experience and free-up your onsite team.

In 2016, Gartner analysts predicted that by 2020 the average person will have more conversations with bots than with their spouse. While that is a depressing thought, there is no doubt that chatbots are popping up everywhere, including hotels and events.

There are different types of chatbots, from voice-activated personal assistants like Alexa to intelligent, purpose-driven bots designed to interact via voice or text message and “trained” to provide information in a defined situation, such as a conference.

Varun Kashiv, director of business development at Web Spider, the company behind the event2mobile app platform, says its event chatbot, Eva, has multiple uses, from serving as an assistant to being an information booth. “One of the biggest advantages is that the moment your attendees register, you can send them a message saying, ‘Hi, I’m Eva and I will be your assistant’ so your attendees know they can ask about speakers, facilities, or discounts before the event without searching the website or emailing the planning team.”

Currently, event chatbots are available on most texting apps, and while many use artificial intelligence, they still need “training” by humans. The bot can gather some data from the event’s website, including dates and locations, but the meeting planner needs to supply it with other detailed information.

Chuck Elias, CEO at Sciens.io, whose Concierge Eventbot has won multiple awards for best new event tech and best audience engagement, says anticipatory design is the key to a successful chatbot. “When someone asks a question, the bot responds with an answer that will cover everything,” he says. For example, if an attendee texts the bot asking if there is free Wi-Fi, the bot could text back ‘Yes,’ or it could text back ‘Yes, here is the password, and this is the download speed.’ Don’t make the customer ask a series of questions.”

While texting may seem old school, Elias says people generally just want the fastest route to the information. He says, “Attendees can always ask Siri (or whichever assistant they use) to text the bot a question, but we find that texting is more private, and eliminates the friction of making your voice understood in a noisy environment.” Elias gives the example of an event at the Javits Center in New York City when several session attendees texted Betty the Bot about an audio speaker that wasn’t working. The bot had not been trained to respond to that topic so it kicked the comments up to a human who was able to contact the audio crew and have the sound turned on. Because people are used to texting, there is no learning curve. Kashiv says, “When people start trolling the bot, you know they are comfortable interacting with it. The bot knows when it is being trolled. For example, If someone asks it for a date, it can be programmed to give multiple fallback responses.”

Not just “Where’s the coffee?”

So, are your attendees going to ditch your app in favor of a chatbot? Corbin Ball, an event technology consultant and speaker, doesn’t think so. He says, “App fatigue is an issue. People get tired of downloading and learning how to navigate them, and text is far and away the most widely used app on a phone. However, apps can offer polling, surveys, and networking to your attendees.” Both Sciens.io and Web Spider also offer event apps, as well as bots, but Kashiv says a bot is not a replacement for an app. “It’s an extension to make the app more interactive.” He also says, “If you are going to a three-day conference, it is worth downloading an app, but if you are just dropping into an event for a few hours, a bot is better.” Gabi, a branded version of Sciens.io’s Concierge EventBot, was available for walk-ins to use at ArtFest Fort Myers, a multiday art fair held in Florida in February. The number to text to reach Gabi was posted on signs around the venue, no download required.

What’s in it for an event planner? Well, lots of things. For a minimal amount of additional work training it to answer things like, “Where is the coffee?” a chatbot can be very useful to the event planning team. James Johnson-Miller, director of event technology at IMEX Group, used a chatbot called Frank, from Sciens.io, at last year’s IMEXLab in Frankfurt, Germany. “We experienced some initial accuracy issues with Frank,” he says, “but that was, interestingly enough, more about us needing to refine and pinpoint what we truly wanted and needed Frank to do.”

Frank answered 3,600 messages from 780 users, most of them sent during the show and a few beforehand. That’s 3,600 queries the staff did not have to deal with. Johnson-Miller says, “Since Frank was such a valuable tool for meeting basic needs and queries at the show, this freed up the IMEX team to help out with other, more complex needs and requests and to focus on innovative initiatives happening with attendees, buyers, and exhibitors.”

Even when you have information booths scattered around the convention center, if the people hired to staff them don’t have an answer, they can also ask the chatbot instead of calling you. While you could use a chatbot to cut down on the number of onsite employees, Johnson-Miller says, “I don’t think about ROI purely in terms of financial value. The goal with Frank was to improve the experience of our attendees by extending the reach of our team to stronger 24/7 assistance.”

Every query is recorded in reports, and the questions that attendees ask can reveal holes in your arrangements. If an attendee is texting to find out where the mother’s nursing room is and you don’t have one, you might want to plan for one next time. Betty, a Sciens.io bot, recorded a lot of attendees asking about water concession stands at an event in Florida, so at the next event in Los Angeles, the organizers made sure that there was water available everywhere. Betty also learned between events. In Florida, she had been trained on 60 topic areas, by Los Angeles that number had gone up to 90.

Johnson-Miller of IMEX says data collected from the bot “is a great indicator of what we were not making clear to our attendees and we’ve found it to be a good source of feedback. In short, Frank’s data is another way to empathize with, and better understand our attendees’ evolving needs.”

Elias also notes another bonus feature: By opting to text the chatbot, attendees are giving their cell phone numbers to the event planner, which is very handy in case of emergency. He cites an event where a fire alarm went off. “The venue staff confirmed to the event team it was a false alarm. They were able to have the bot text everyone that information and the event continued without too much disruption. About 70 percent of the attendees had engaged with the bot which was enough to get the message out to the others.”