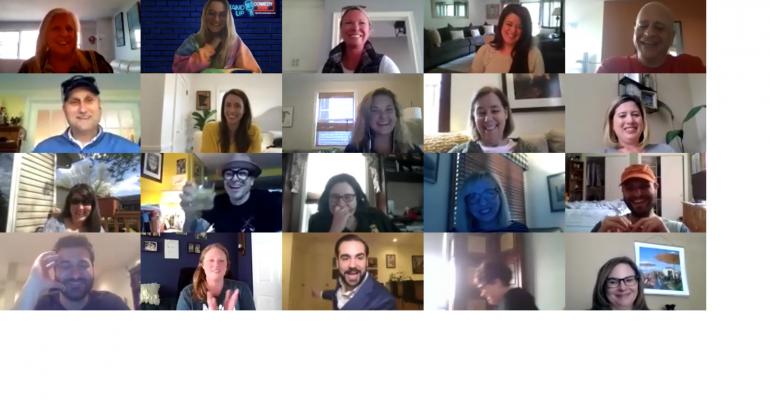 So, a Guy Walks into a Zoom Call…

One genius way to upgrade your online meetings and support talented entertainers.

Stop me if you’ve heard this one: Your division runs a weekly Zoom happy hour. It’s a nice way to check in and say hello. You’ve had some fun with trivia games and even a hat party, but with more than 50 people on the call, it’s time to change things up. How about hiring an entertainer to turn your Zoom call into a special event?

Quarantine comedy is having a moment, with performers and club owners attempting to reach audiences online during the pandemic. But it’s the rare package to find a comic like Harrison Greenbaum who’s so successfully making the transition, combining comedic skill (he’s a national touring headliner, at least back when travel was allowed) and tech know-how (he’s also a Harvard grad). From his New York City apartment, the comedian—who you might recognize from shows like America’s Got Talent, Last Comic Standing, and Conan—has performed more than a hundred comedy shows in less than two months.

Informa Connect (the division of Informa that includes MeetingsNet) was one of his clients, recently turning its weekly Zoom check-in into Comedy Club Live! After a warm intro from producer Michael Cerbelli, CEO and president of Cerbelli Creative, the comic took up his square on the Zoom call, mixing jokes, magic, and audience interaction. Greenbaum kept participants on their toes for the 30-minute set, asking them questions, riffing off their home-office backgrounds and hometown locations, and providing lots of quarantine humor: “This is my dream—I’ve always wanted to perform with my pants off!”

“I’ve been a fan of Harrison’s since I first saw him at The Special Event conference during Michael Cerbelli’s: The Hot List™ showcase of great performers and services. What I didn’t realize until I saw him during his Zoom presentation for the Informa team is how fast on his feet he is,” says Lisa Hurley, content director for Special Events magazine and The Special Event. “He drew us all into his act—even on a virtual platform—with just the right balance of laughs and snark. And I didn’t realize he has a magic act, too. The man does it all.”