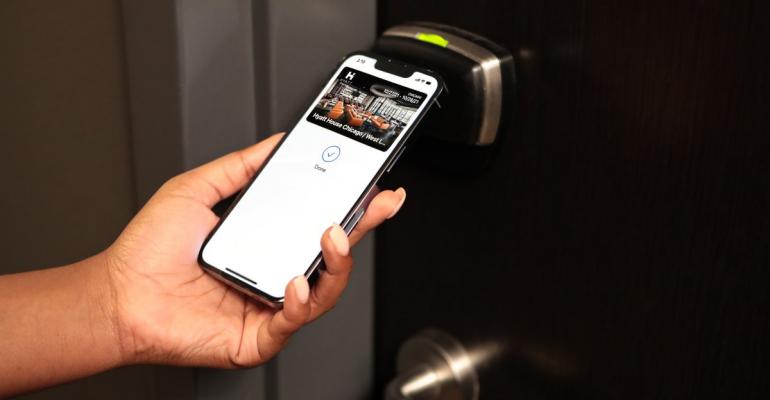 The iPhone Wallet app is now home to Hyatt room keys, and it might soon help speed you through TSA security checkpoints.

It’s commonplace to use the iPhone to store airline boarding passes and credit cards, but travelers will have more reasons to pop open the Wallet app in 2022.

In December, six Hyatt Worldwide properties began offering the choice of having a digital room key stored on a guest’s iPhone (running iOS 15 or an Apple watch running iOS8). The e-keys work in conjunction with the World of Hyatt app. When travelers book through the app, there’s an option to download the key to the iPhone Wallet. The key won’t work until after check-in, but before then, a traveler can tap on the wallet icon to get their reservation number, dates of stay, property details, and a link back to Hyatt to make reservation changes.

Next up for the iPhone Wallet is the ability to store a driver’s license or other photo ID. The feature was announced in April 2021 but hasn’t been yet implemented anywhere. It’s said to be on deck for a state-by-state rollout in 2022. In September, Apple announced that Arizona and Georgia would be the first states to have it, with Connecticut, Iowa, Kentucky, Maryland, Oklahoma, and Utah to follow.

Eventually, Apple plans to have the Wallet identification accepted at TSA airport security checkpoints. According to an article in Macworld, “Instead of handing over their iPhone to show ID,  the checkpoints will have an identity card reader where users can tap their iPhone or Apple Watch. A TSA request for information will appear and users will need to authorize it via Face ID or Touch ID.” Reportedly, facial scans and fingerprints will be required when registering a driver’s license in the Wallet.