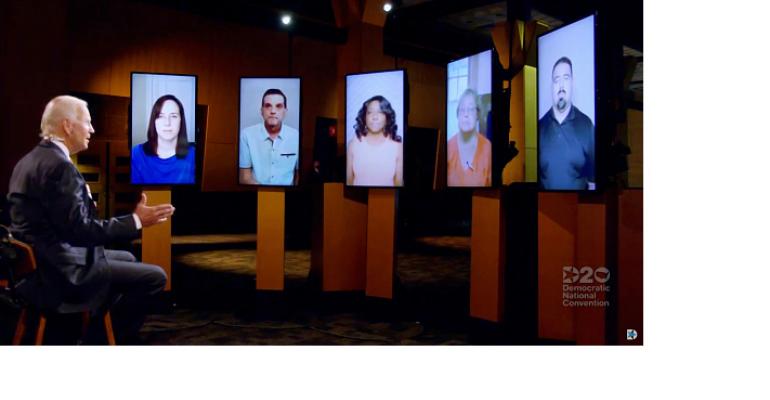 The Democrats are just like you, forced by Covid-19 to take their first swing at an online convention.

Most event planners will never be responsible for a virtual event like this week’s Democratic National Convention. But watching politicians navigate this uncharted online territory is time well spent for conference and event organizers developing their skills in communicating screen to screen rather than face to face.

One key question heading into the convention was whether the format could generate enthusiasm among voters. This is the same conversation the meetings industry is having. Call it enthusiasm, focus, or simply engagement—the dilemma for planners is to deliver a program that gives attendees the same visceral reaction as being with colleagues and presenters face-to-face. And for speakers, the challenge is building momentum when they can’t feed off the energy of the crowd. For the Democrats, there were mixed results as they experimented with live and pre-recorded segments and wove together a story of their policy objectives and larger ambitions.

Short and sweet: The pace of the convention was snappy. Few speakers had more than two minutes of airtime, and a host connected the dots between segments.

While it might be impractical for your online educational conference to jump from speaker to speaker, can your presenters intersperse more polling, Q&A, videos, breakout sessions, or whiteboarding activities? It might not seem like a high bar, but your virtual event always has to be more interesting than email and the refrigerator.

The voice of the people: Actress Eva Longoria emceed the first night of the convention and early in the evening cut to a number of everyday Americans to get their thoughts, working to bring authenticity to the virtual politicking and weave a story.

Those interviews with a farmer, a student, a small business owner, and others were somewhat low-energy, but it’s easy to imagine how the idea could be used successfully by planners who want to get the voice of company employees or association members into an online conference. The montages that seemed to work the best—such as a mash up of commentary from the former Democratic candidates and the introduction of Kamala Harris by her family members—were pre-recorded and professionally produced.

All the world’s a stage: The convention had plenty of people speaking from their living rooms (a standard backdrop for conference presenters in the age of Covid-19) but when it was time to make a bigger impression, they used other venues or green screens. Jill Biden, for example, spoke from a school classroom where she taught English when her husband served in the Senate.

What would make a good, and perhaps unexpected, stage for your executive: The floor of the manufacturing facility? The site of your next incentive program? Perhaps even the company cafeteria? Work with your production company to nail the look and feel you’re aiming for. When Kamala Harris spoke on the third night of the event from the Chase Center in Wilmington, Del., she was on a large stage in front of a nearly empty room, an odd setting. Her speech was widely praised, but the feel wasn’t as intimate as when Barack Obama spoke from the American Museum of the Revolution in Philadelphia, standing at its exhibition on the creation of the U.S. Constitution.

Don’t forget to entertain. The Democratic convention did it with a lineup of singers: Billie Eilish, Jennifer Hudson, John Legend, and others.

It’s important to work some downtime into your virtual conference. You won’t have the budget to match the Democrats, but take breaks, have some fun, and loosen up for the virtual happy hour at the end of the day.

The DNC’s first stab at an all-online convention went relatively well, but it will probably be even stronger if they have to—or choose to—do it virtually again next time. That’s probably how most planners feel about this year’s Covid-induced online meetings.