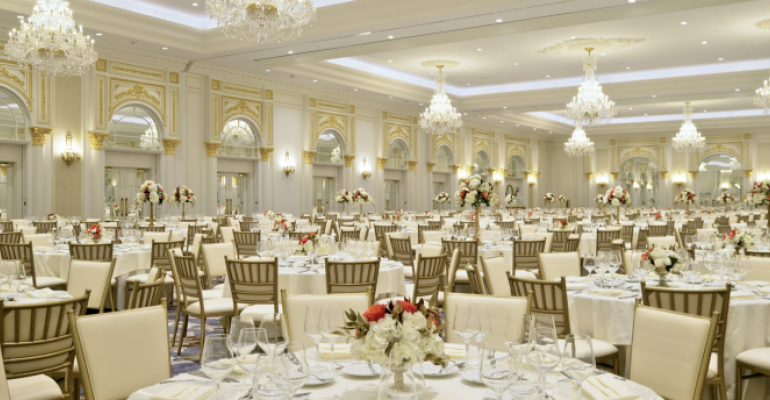 Trump Hotel Is Out, Waldorf Astoria Is In

It took Hilton’s high-end brand just 21 days in May to rebrand the prominent capital property on Pennsylvania Avenue.

The Trump International Hotel in Washington, D.C., closed May 11. Three weeks later, it was back in business, refashioned as the Waldorf Astoria Washington D.C., with all the bling of the former brand but none of the political burden.

The hotel, a restoration of the Old Post Office built in the late 1800s, originally opened in fall 2016. Located at 1100 Pennsylvania Ave. NW, the landmark property has prime location between the White House and the U.S. Capitol, and just a block from the Smithsonian Museum of Natural History and other sites on the National Mall.

Groups will find 38,000 square feet of event space, including the elegant Presidential Ballroom (13,200 square feet) with 22-foot-high ceilings and space for 1,200 in banquet rounds. In addition to the ballroom, divisible by three, and two other large spaces—Franklin Study (2,807 square feet) and Lincoln Study (2,950 square feet)—there are at least 11 smaller meeting rooms available on the first and second floors of the hotel.

The property’s 263 guest rooms and suites have a historical, formal feel, decorated in shades of blue, white, and cream, many with chandeliers and all with gold furniture accents. Amenities include bathrobes, electric sheers and drapes, clothing steamers, and Nespresso machines.

The Walter E. Washington Convention is less than a mile north of the hotel, and Ronald Reagan Washington National Airport is about 3.5 miles to the south, across the Potomac River.