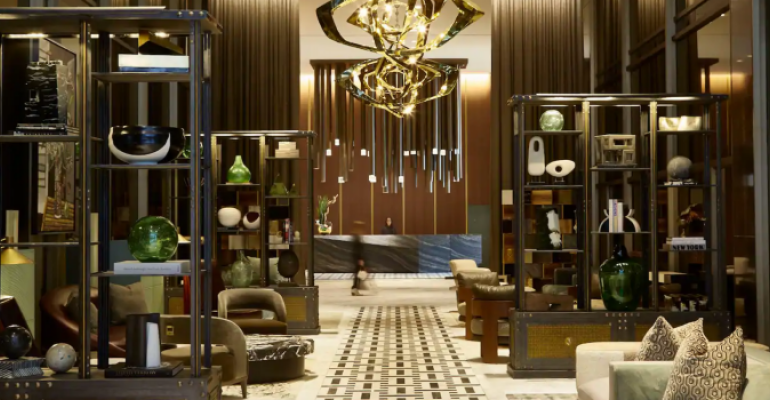 The lobby of the Thompson Dallas, opening in early November
Destination & Venue News

Hyatt’s boutique brand also has another Texas property on the way.

Two Thompson Hotels were scheduled to open in Texas this fall. The property in Dallas is on track but the one in San Antonio has been pushed back a few months, with plans to launch in early 2021.

The 219-room Thompson Dallas is part of the $460-million redevelopment of the landmark First National Bank Tower, which has been called the largest reuse project in the history of the state. The luxury downtown hotel is accepting reservations starting November 11 and will offer groups the 13,457-square-foot National Ballroom, with views of the city through 20-foot, floor-to-ceiling windows.

There are four additional meeting rooms, ranging from 397 square feet to 1,096 square feet, as well as a ninth-floor pool deck, a spa and fitness center, and three full-service dining options. The hotel’s 52-story building, which has been renamed The National, also includes apartments, retail space, and offices.

A few hundred miles to the south, the 162-room Thompson San Antonio is under development in The Arts Residences development, just across the River Walk from the Tobin Center for the Performing Arts. Plans call for a 20th-floor rooftop bar with views of downtown plus more than 5,000 square feet of event space, including a 4,000-square-foot ballroom.