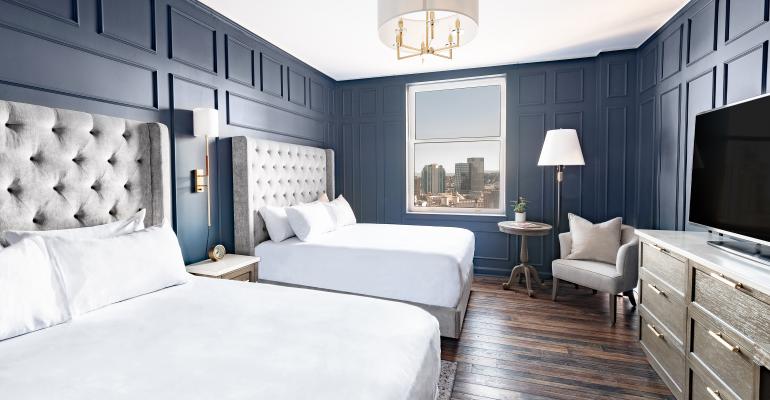 San Francisco's historic Union Square property is coming out of the pandemic with new owners, a new name, and a full renovation by late spring.

In March 2020, San Francisco's historic Sir Francis Drake Hotel closed due to the Covid pandemic. In spring 2021, it changed hands from the Pebblebrook Hotel Trust to Northview Hotel Group, and now the 418-room property is in the midst of a makeover—including its name.

The hotel’s eponymous sea captain was an explorer, credited with leading the second circumnavigation of the globe, but he was also a slave trader. The hotel’s owners decided to move away from that legacy, giving the property a new name, Beacon Grand, at the same time as the top-to-bottom facelift.

The 1928 hotel on Union Square, about three-quarters of a mile from the Moscone Center, will offer 17,000 square feet of renovated event space in 13 meeting rooms when it reopens late this spring. The largest event space, the Empire Ballroom, is 3,081 square feet.

Highlights of the project include renovation of the lobby, with its 30-foot-high ceilings, three chandeliers, and marble flooring. The oversized bar has been removed from the lobby, giving the space an open, great-room feel with living room-style furniture. All guest rooms and suites are being renovated, with oak flooring, railroad shower tile, and custom-made wallpaper that weaves iconic city images into a damask pattern.

The hotel’s Beacon Lounge will serve three meals a day, featuring a menu of classic San Francisco dishes, cocktails, and California wines. The Library, a bar just off the Beacon Lounge, will specialize in rare whiskeys from around the world as well as select bourbons, single malt scotches, and ryes. Later in the year, the hotel is scheduled to debut a French-inspired restaurant and reopen its Starlite Room rooftop lounge, which is also being updated.