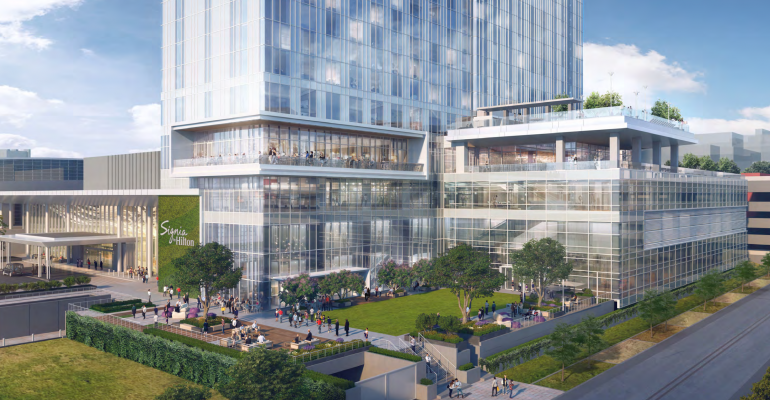 Signia by Hilton to Begin Construction in Atlanta

Construction of the first new-build Signia by Hilton is expected to get underway this month adjacent to the Georgia World Congress Center in downtown Atlanta. The 975-room hotel plans an early 2024 opening.

Hilton Worldwide launched the convention-focused brand in February 2019. Its properties will have a minimum of 500 guest rooms and 75 square feet of event space per room. No Signia hotels are welcoming guests yet, but those in the pipeline include Signia by Hilton Orlando Bonnet Creek, a conversion of the 1,001-room Hilton Orlando-Bonnet Creek Resort, and a new-build Signia by Hilton Indianapolis, which has been proposed for the city’s Pan Am Plaza.

The 40-story, $308 million Signia by Hilton Atlanta will have a walkway connection to the GWCC, overlook Mercedes-Benz stadium, and offer about 75,000 square feet of indoor meeting space of its own.

The property’s Grand Ballroom will measure 40,608 square feet; in addition, groups will find a 7,784-square-foot ballroom and 18,000 square feet dedicated to meeting rooms. Also, more than 31,000 square feet of outdoor event space is planned, including an event lawn, event deck, and a pool deck. Architectural elevations and renderings are shown in the GWCC Authority project information report from March 2021.

While the project’s developer is Drew Company Atlanta, LLC, and the new property will be operated by Hilton, Signia by Hilton Atlanta will be owned by the GWCC Authority. Other landmarks within walking distance are State Farm Arena, CNN Center, and Omni Atlanta Hotel.