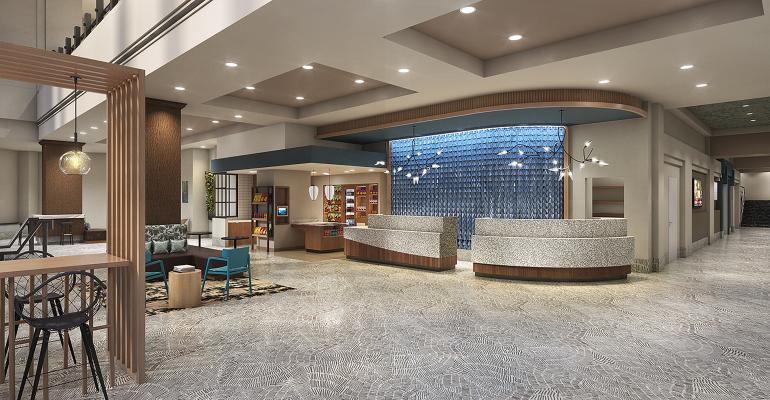 A Refresh for Toledo’s Convention Package

Two Hilton properties open next week in advance of a convention center expansion wrapping up this summer.

Toledo, Ohio’s convention package has upgraded substantially in the past two years. In 2020, Park Inn Radisson closed, and Hotel Seagate, which had sat empty for years, was finally marked for demolition.

Sitting adjacent to the city’s convention center, the Park Inn has now been transformed into two Hilton properties opening on May 11, while the space once occupied by Hotel Seagate is being used for a new convention center ballroom.

Hilton Garden Inn Toledo Downtown and a Homewood Suites by Hilton Toledo Downtown are opening under one roof, sharing a lobby and more than 8,000 square feet of meeting and event space, including a 5,503-square-foot ballroom. The affordable Hilton Garden Inn has 217 guest rooms, while the Homewood Suites has 93 suites, each with a kitchen and sitting area.

Upgrades for the convention center are also underway. The venue, long known as Seagate Convention Center, was renamed Glass City Center in February, and its $60 million renovation and expansion will include a new 16,000-square-foot ballroom scheduled for completion in August. The existing 400,000-square-foot building is getting upgrades to lighting, décor, and artwork.

Detroit Metro Airport is 45 minutes from the convention complex.