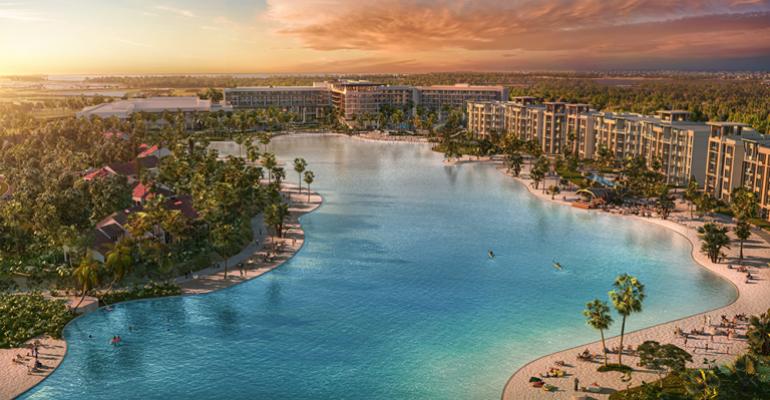 The property expects to open in 2023 when the former Villas of Grand Cypress is reborn as Evermore Orlando Resort.

The Conrad Orlando, with 433 guest rooms and 40,000 square feet of indoor meeting space, has broken ground as part of 1,100-acre Evermore Orlando Resort under development about five miles from Walt Disney World.

Evermore, a comprehensive redevelopment of the former Villas of Grand Cypress resort and the Grand Cypress Golf Club, expects to have 1,500 bedrooms available when it opens in summer 2023. In addition to hotel guest rooms, the property will include 69 vacation homes, ranging from five to 11 bedrooms; 76 four-bedroom “flats”; and 41 two- and four-bedroom villas.

The resort will surround an eight-acre man-made lagoon/pool  called Evermore Bay, with a 20-acre beach complex featuring bars, cabanas, private fire pits, food hall, and a variety of watersports. There will also be a two-story boathouse that accommodates private events. The lagoon will be notable for its environmentally sustainable technology that requires far less chemicals and only two percent of the energy of conventional swimming pool systems.

The Conrad property will have a spa, several dining options, and a “signature rooftop experience,” and will operate with Hilton’s CleanStay standard of cleanliness.

The project’s developer is Dallas-based Dart Interests, whose other real-estate projects include a partnership with Lowe Enterprises to expand South Carolina’s Wild Dunes Resort.