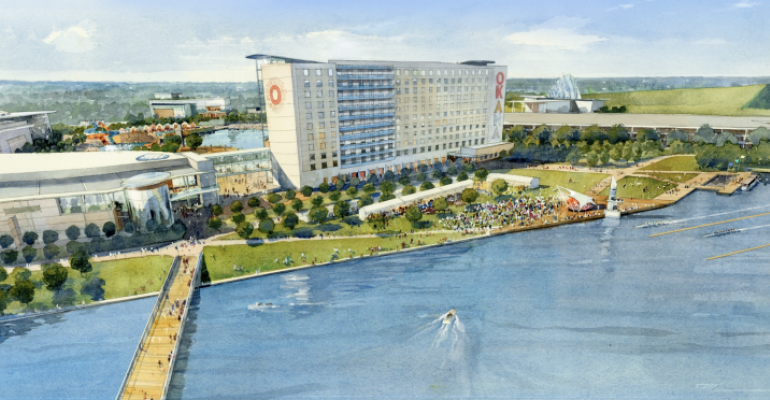 A five-acre lagoon will be the centerpiece of the new 404-room property that is planned next to the just-opened First Americans Museum.

This year Oklahoma City has seen the opening of the 500,000-square-foot Oklahoma City Convention Center and the 605-room Omni Oklahoma City Hotel. The latest hospitality announcement for the state capital is a $300 million resort going up adjacent to the city’s new First Americans Museum.

The 173,000-square-foot museum, which celebrates Oklahoma’s indigenous people, opened in September. Now the Chickasaw Nation has announced plans to complement it with the Okana Resort, an 11-story, 404-room property featuring 39,000 square feet of conference space. The museum’s Hall of the People is also available for group events, with space for a banquet of up to 800.

The resort, which will sit along the Oklahoma River, has designed a five-acre lagoon at its center, with beaches and a pedestrian bridge. The property will not have a casino but is planning a 100,000-square-foot indoor waterpark, 33,000-square-foot family entertainment center, a spa, golf simulator, retail outlets, and dining options.

The property, about three and a half miles from the convention center, is expecting to open in late spring of 2024.

Oklahoma City’s Will Rogers World Airport is about six miles from downtown. Dallas is a three-hour drive to the south.