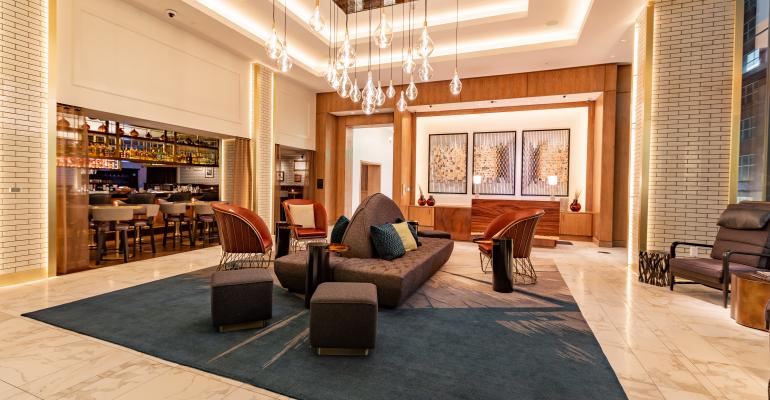 Booze and breakouts are unlikely bedfellows, but planners with small meetings headed to Louisville, Ky., might make an exception. The Hotel Distil has opened on Louisville’s “Whiskey Row,” a block on W. Main St. that was once a post-Civil War hot spot for the bourbon industry. The 205-room property, part of Marriott International’s Autograph Collection, is built in the original location of bourbon producer J.T.S. Brown and Sons and incorporates the building’s original 1860s era façade as well as design elements of the time and place, such as copper fixtures, bourbon barrels, black metal accents, and globe light fixtures.

Hotel Distil has more than 11,000 square feet of event space, including a 5,000-square-foot Grand Ballroom and three other meetings rooms ranging from 775 square feet to 1,000 square feet. The 2,000-square-foot rooftop terrace is the only open-air, all-season terrace in Louisville. In addition to a 72-seat steakhouse, Repeal, and the open-air bar, Bitters End, small groups can be seated in the private, 15-person Barrel Room with a separate bar.

One of the unique experiences at the property is a nightly celebration of the repeal of Prohibition in the hotel's lobby. The whiskey cocktail toast happens each evening at 7:33 p.m., which is 19:33 in military time, the year Prohibition was repealed.

The hotel is less than half a mile from the Kentucky International Convention Center and six miles from Louisville International Airport.