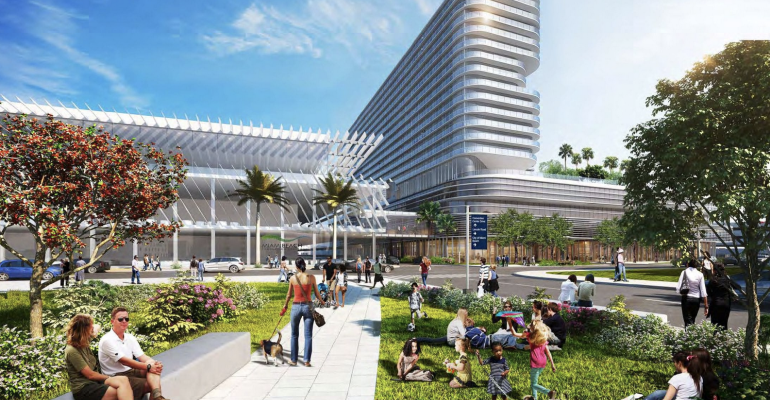 The Grand Hyatt Miami Beach will connect to the convention center while having four floors of meeting space of its own.

Early 2023 will see the groundbreaking of the Grand Hyatt Miami Beach on 17th Street and Convention Center Drive, which will serve as the anchor of the convention center district. Completion is expected by July 2025.

The 17-story building will have 12 floors of guest rooms featuring 800 units including 48 suites, as well as four floors dedicated to meetings and events. Among the 90,000 total square feet of indoor group space will be two ballrooms, while another 10,000 square feet of space will be outdoors. There will also be a resort-style pool deck with panoramic views of the trendy neighborhood. And a second-floor skybridge will allow meeting attendees to get the convention center without going outside.

The property will offer an upscale restaurant, a lobby bar and lounge, and three other food-and-beverage outlets. For recreation, there will be two pools and a fitness center.

The hotel’s resiliency and sustainability measures include flood-risk mitigation, stormwater management and reuse, and use of solar power, all of which are intended to ensure operational continuity during and after weather events.

Large special-event spaces within two blocks of the hotel are the New World Center (in photo), a concert hall featuring state-of-the-art multimedia capability, and The Fillmore Jackie Gleason Theater, once home to “The Jackie Gleason Show” and one of the most popular cultural venues in Miami Beach. There’s also Lincoln Road, a pedestrian-only boulevard with dozens of shops, galleries, and restaurants, which is available for receptions and dine-arounds. The ocean beaches are a four-block walk from the hotel.