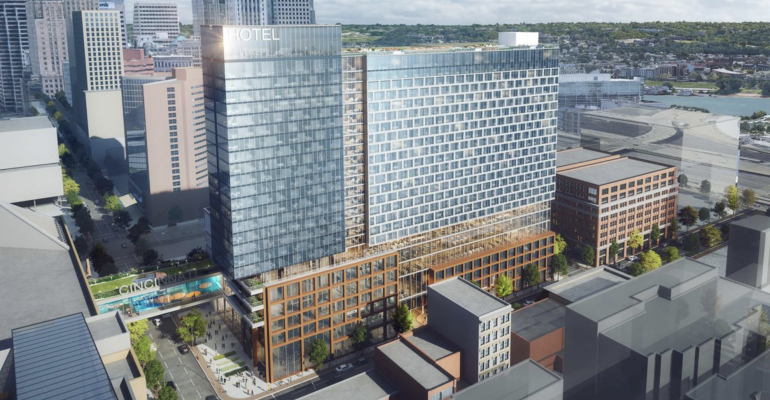 Among the four designs submitted for a Cincinnati convention center hotel is this from Portman Holdings.
Destination & Venue News

Four developers have submitted plans for the new property, which may begin construction in the first half of 2023.

In January, the Cincinnati Center City Development Corp., known as 3CDC, was named lead development manager for the Convention Center District by the City of Cincinnati and Hamilton County, with responsibility for managing the development of a new convention center hotel. Four developers have now submitted plans to 3CDC.

Founded in 2003 with a mission to help revitalize the city’s downtown, 3CDC has overseen a large number of projects in Cincinnati, from renovations of Washington and Ziegler parks to new housing and parking facilities to improved civic facilities such as Memorial Hall, a 550-seat performance and event space. The hotel project, though, will be the most impactful for driving convention attendees to the city.

The minimum requirements set by 3CDC for the new property are 800 rooms, 60,000 to 80,000 square feet of meeting space, two ballrooms, and space for restaurants and bars. It also needs to be part of a national, upscale hotel chain, according to Cincinnati news outlet, WCPO.

The new hotel could be on the south side of the Duke Energy Convention Center, or across the street to the east, on the site of the former Millennium Hotel, which was demolished last summer. According to WCPO, 3CDC hopes to pick a developer by the end of the year and start construction in the first half of 2023. The four developers that have submitted proposals include Portman Holdings, Matthews Southwest, Inland Pacific Company, and Newcrest Image.

Other hotels close to the convention center include the Hyatt Regency Cincinnati and the Hilton Cincinnati Netherland Plaza.