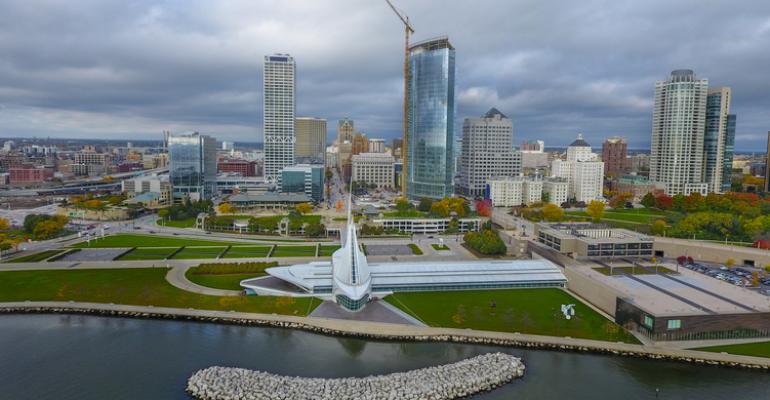 The GOP selects Milwaukee for its convention in 2024, just four years after the Democratic Party brought its nominating event to the swing state. Here’s what the city hopes to gain from the high-profile convention.

Attendance in summer 2024 (dates still to be determined) is expected to be large enough to fill the 18,000-seat FiServ Forum. In 2016, the GOP drew 18,000 people to Cleveland’s Quicken Loans Arena (now Rocket Mortgage Fieldhouse)—with more than 15,000 being members of the media and 2,472 being convention delegates. In total, it is expected that more than 50,000 people will come to Milwaukee for the event.

In 2020, the Democratic convention in Milwaukee was moved from FiServ Forum to the Wisconsin Center because of a Covid-related local law capping in-person attendance for any event during that time at 250. Joseph Biden and his running mate Kamala Harris made their acceptance speeches for the convention remotely from Delaware, while many other elements of the convention were also conducted at other sites and broadcast virtually in real time. The Democratic Party still paid $5.5 million of the $7 million in rent on the unused FiServ Forum.

According to a press release from Visit Milwaukee, “Beyond the economic boost, the Republican National Convention will positively elevate the profile of our city throughout the world, attracting other major events and conventions to southeastern Wisconsin and leading to more business and more money invested in our economy. Proof can be found in previous convention cities.”

For example, Visit Milwaukee cited Cleveland, whose meeting leads have nearly doubled since the 2016 GOP convention. Cleveland officials also attribute landing the 2021 NFL Draft, the 2019 Major League Baseball All-Star Game, and the 2022 NBA All-Star Game in part to the GOP’s positive experience there.

Other lasting effects that will benefit Milwaukee might include a big boost in communications-technology infrastructure. Visit Milwaukee notes that “cellular providers collectively invested millions in Tampa Bay’s data networks” for the 2012 RNC, while Cleveland received “tens of millions from AT&T in wireless and wired network upgrades.”

Further, “it’s our job to pursue conventions that don’t just bring us hard dollars, but those that will bring prestige and exposure that will ultimately enhance our reputation,” says Visit Milwaukee President & CEO Peggy Williams-Smith. “Bringing this convention to Milwaukee was the result of sustained collaboration from a statewide, bipartisan coalition that deeply loves our community and believes in the results this convention will deliver.”