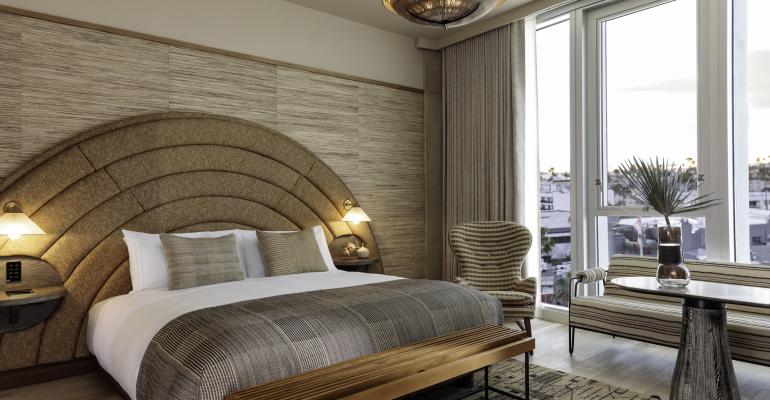 The fourth Proper hotel designed by Kelly Wearstler will debut with 24,000 square feet of meeting space.

The Santa Monica Proper Hotel has begun taking reservations for stays after next month’s official opening on June 17. The 271-room hotel is located in downtown Santa Monica in an expanded Spanish Colonial Revival building dating from the 1920s.

The interiors are designed by the global designer and lifestyle guru Kelly Wearstler, who preserved the building’s Spanish architecture with Moorish touches but added natural sunlight and an organic palette with decor that references the beach. The rooms and public areas feature original work from local artists to create a coastal ambiance. All rooms provide Italian linens, marble bathrooms, and views of downtown, and some suites have private terraces.

The property has 24,000 square feet of indoor and outdoor meeting space, also designed by Wearstler, including a 3,974-square-foot ballroom which can host 400 attendees for a presentation and 300 for a banquet. An additional 1,352 square feet of prefunction space can host 135 for a reception. There are two breakout rooms and several private terraces as well. The hotel’s courtyard can host up to 150 guests for dinner and 225 for a reception. The property’s rooftop lounge, bar, and pool have a combined 7,727 square feet of space capable of hosting events for up to 500 people.

Other amenities include a fitness center with a yoga terrace, a Surya Spa, and three F&B outlets. Signature restaurant Onda, a collaboration between chefs Jessica Koslow and Gabriela Camara, features a Latin-influenced menu and sustainable seafood. Solar is an indoor/outdoor rooftop café, and the lobby lounge offers small plates, artisanal mezcal, and local wines.