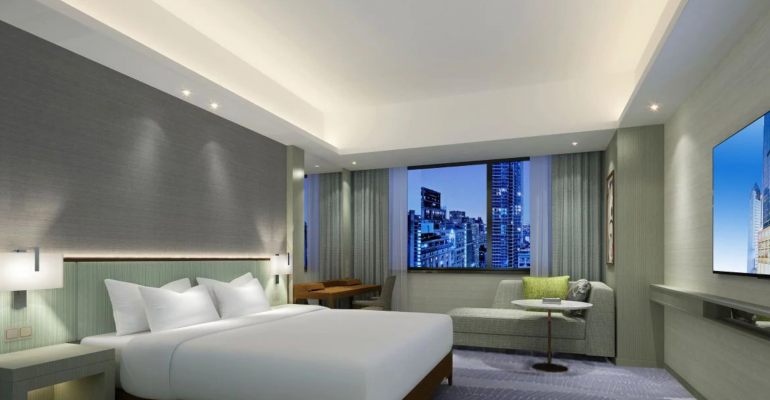 The hotel is located across the Yangtze River from the Chongqing International Convention and Exhibition Center.

Hyatt has debuted a new hotel in Chongqing, China’s former wartime capital and a mega-metropolis of 30 million people. The Hyatt Regency Liberation Square Chongqing has 275 guest rooms and 33 suites situated across floors 19 through 37 in a new mixed-use tower that includes international consulates, office space, and an upscale shopping mall.

Rooms feature Smart TVs, Bluetooth sound systems, and large workspaces. All rooms either face the Liberation Monument in the square or have city skyline or garden views. Liberation Square is located in the city’s main banking, tourism, and entertainment district, and Chongqing, nicknamed the Misty City, is a leading commercial center of Western China.

Two restaurants are scheduled to open later this year. The signature restaurant, Made in China, is an annex of the award-winning restaurant at the hotel’s sister property, the Grand Hyatt Beijing, and will offer its most famous dish, Peking duck cooked in a wood-burning oven. There will also be a 24-hour café and food market featuring international staples and regional cuisine.

There is currently more than 17,000 square feet of meeting space in two venues: the 6,458-square-foot pillarless Regency Ballroom, which can accommodate up to 550 guests, and the 10,764-square-foot Rooftop Garden, which features lush greenery, koi fish ponds, and city views with seating for corporate events or cocktail receptions. More flexible meeting rooms are planned to open by the end of the year. The hotel is also convenient for the Chongqing International Convention and Exhibition Center. Amenities include an 80-foot indoor pool on the fifth floor, a fitness center, and spa. The property is 13 miles from Chongqing Jiangbei International Airport.