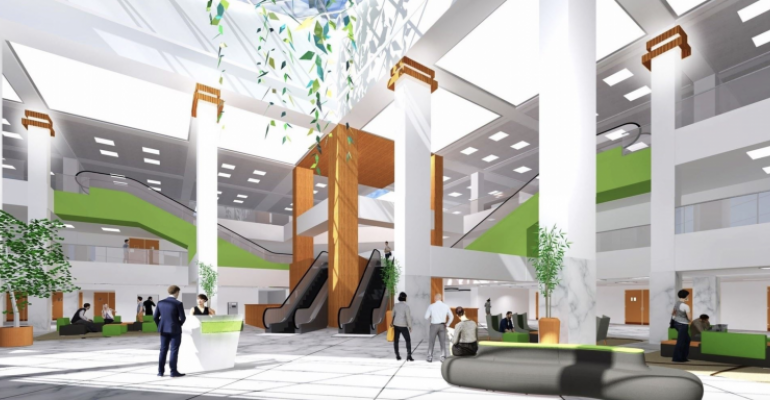 How Dayton Plans to Up Its Events Game

The western Ohio city is working to jump-start its meeting and trade-show sector with a significant overhaul of the Dayton Convention Center.

The Montgomery County [Ohio] Convention Facilities Authority has taken the next step in its plan to improve the Dayton Convention Center, naming Messer Construction Co. to manage an upcoming $31 million renovation.

MCCFA, a government body formed in 2019, took ownership of the convention center in early 2021 with a mission to revitalize the building and drive economic growth through the events sector. The building offers 150,000 square feet of meeting space, including a 77,000-square-foot exhibit hall, three ballrooms, 22 meeting rooms, and a 672-seat theater.

One notable change expected for the convention center is a modernization of the main entrance. Designers are proposing that the circular metal-mesh sculpture and roadway now at the entrance be removed and replaced with a more welcoming pedestrian courtyard (photos below). Above the entrance, a new terrace would provide shade to the courtyard and a new gathering space to the second floor.

As impactful as that change would be, exterior improvements are expected to use just 4.5 percent of the renovation budget. Interior improvements have been allotted 63 percent of the $31 million, and infrastructure the remaining 32.5 percent. Infrastructure upgrades will be focused on data and communications, air handling, electrical distribution, and escalators. Interior upgrades are expected to include new retractable walls in the exhibit hall and expanded prefunction space as well as updates to the theater, lobby, VIP lounge, and skywalk to the Radisson Hotel. A new raised pedestrian crosswalk is also proposed to better connect the hotel.

Construction is expected to begin in the last quarter of 2022 and last 24 months, with the building remaining open throughout the project.

Dayton International Airport is 13 miles north of the city. Major nearby cities include Cincinnati, 55 miles to the south; Columbus, 72 miles to the east; and Indianapolis, 117 miles to the west.