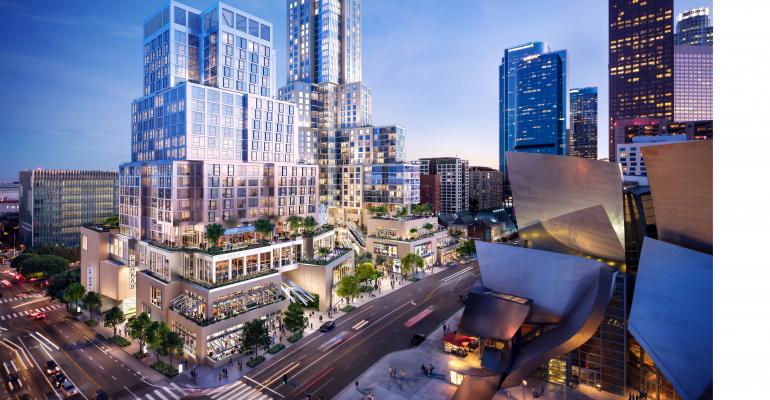 A rendering of the Conrad Los Angeles with the Walt Disney Concert Hall to the right.
Destination & Venue News

The Grand LA Project to Include Conrad Property

A billion-dollar mixed-use development going up across from the Walt Disney Concert Hall in Los Angeles will include a 305-room luxury hotel.

When Conrad Los Angeles opens in 2022, Hilton’s Conrad Hotels & Resorts luxury brand will have its first property in California. The 28-story hotel will be part of a mixed-use development called The Grand LA, designed by Frank Gehry, and across the street from one of the architect’s well-known creations, the Walt Disney Concert Hall.

The 305-room high-rise will take advantage of the predictably pleasant Los Angeles weather with an elevated indoor/outdoor lobby that has views of the concert hall, a 16,000-square-foot rooftop terrace, and a pool deck looking out over the city’s downtown. Other highlights of the hotel are a spa and 12,000 square feet of meeting and event space

The Grand LA is a $1 billion project that, in addition to the hotel, will include more than 430 apartments in a separate 39-floor tower, 26 retail stores, numerous places to eat and drink, and a public plaza. Along with the Walt Disney Concert Hall, arts venues within walking distance include The Broad, a contemporary arts museum; The Music Center performing arts complex; and the Museum of Contemporary Art. The Los Angeles Convention Center is two miles away, and Tom Bradly International Airport is 19 miles, or about 30 minutes with light traffic.

This will be Conrad’s seventh hotel in the U.S., following those in Miami; Fort Lauderdale, Fla., Washington, D.C.; Indianapolis; Chicago; Las Vegas; and Nashville. The Tennessee property is expected to open in May 2022 with 234 guest rooms.