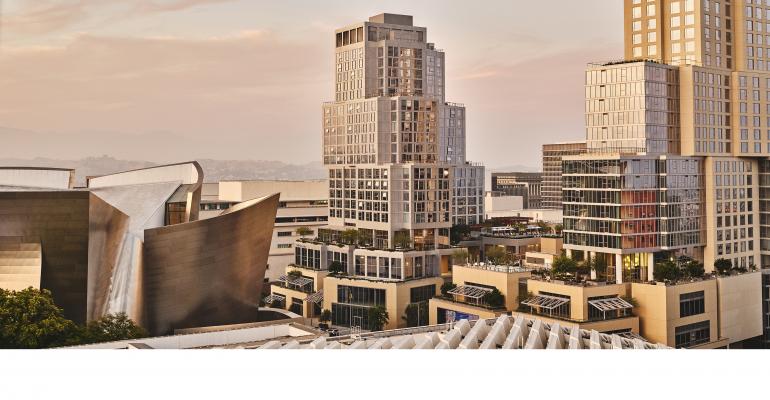 The new-build 305-room property has a winning location in the downtown Los Angeles arts district.

While the design of the 305-room, 28-story hotel is all glass and straight lines, it sits across the street from another curving steel Gehry creation, the Walt Disney Concert Hall, home of the L.A. Philharmonic.

Groups will find 8,800 square feet of indoor meeting space, including the 4,800-square-foot Grand Park Ballroom and the 1,817-square-foot Olive room. The ballroom can be divided into three spaces while Olive breaks into two.

Conrad is one of three luxury brands in Hilton Worldwide’s portfolio, alongside Waldorf Astoria and the newer Tempo brand. As such, it includes opulent amenities like the 7,000-square-foot Conrad Spa Los Angeles, a collection of restaurants helmed by award-winning chef and humanitarian José Andrés, and artwork throughout the reception and lobby spaces. The lobby bar is made from polished and glazed lava that is 11,000 years old.

The Los Angeles Convention Center is two miles from the hotel, and several arts venues are within walking distance, including contemporary-arts museum The Broad and the Museum of Contemporary Art.