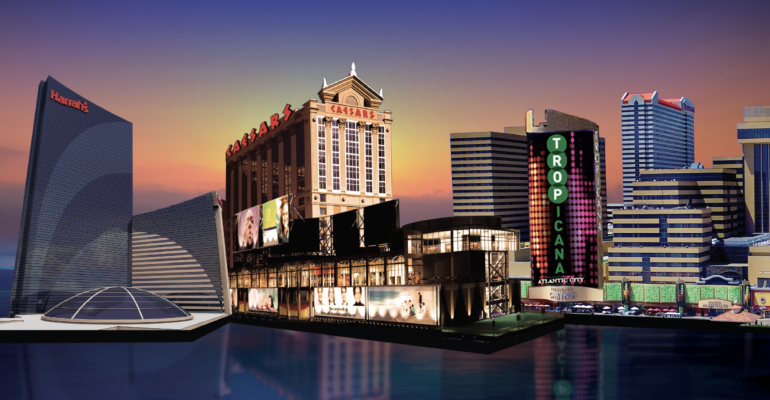 Harrah’s, Tropicana, and Caesars resorts will see a combined $400 million in upgrades by 2023

The three meetings-friendly properties in Atlantic City, N.J., operated by Caesars Entertainment are about halfway through a $400-million upgrade project that’s focused mainly on guest rooms and food and beverage outlets plus soft-goods upgrades in meeting spaces.

In summer 2021, $170 million in guest-room refurbishments were completed across Caesars and Harrah’s Resort. At Caesars, about 600 guest rooms and suites in the Centurion and Ocean Towers were redesigned to be 450 to 700 square feet and feature new beds, furniture, lighting, carpets, and fixtures. Between Caesars and the Tropicana located next door on the boardwalk, there are 4,500 guest rooms along with two 17,000-square-foot ballrooms, a 20,000-square-foot exhibit hall, and more than two dozen breakout rooms.

At Harrah’s, the Atrium Tower, with about 600 suites among the resort’s total of 2,585 guest rooms, were fully refurbished. Next up: The Waterfront Tower at Harrah’s will have its roughly 600 guest rooms redone. That project, set for completion in April 2022, provides meeting groups with newly upgraded rooms that are adjacent to the Waterfront Conference Center, which has two 20,000-square-foot ballrooms to go along with 52 breakout rooms. The property is set in the Marina district, a five-minute drive from Caesars and Tropicana on the ocean.

Steve van der Molen, vice president of meeting operations for Caesars’ Atlantic City properties, notes that other upgrades to the trio of hotels will come in the form of new and varied restaurants. “We’re going to use different concepts that we think are very appealing to event organizers and their attendees. Because our meeting groups range from medical associations to trade unions to law enforcement to companies that bring families to their meetings, we have to appeal to everybody with our F&B offerings.”