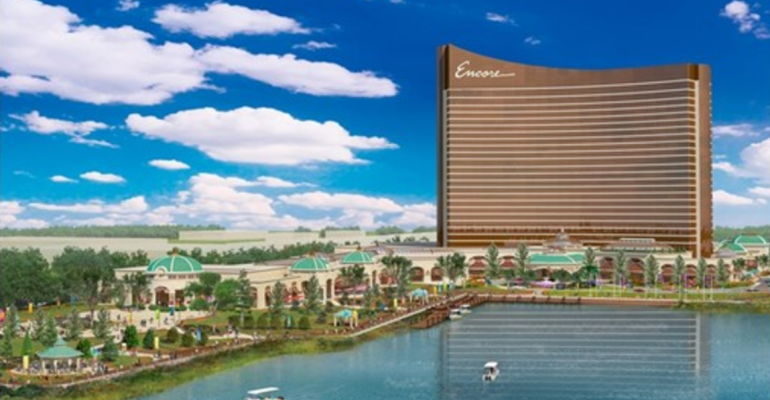 The Encore Boston Harbor is a riverfront property with 50,000 square feet of indoor and outdoor meeting space.

The Encore Boston Harbor, a hotel, casino, and entertainment venue, is on track to open on June 23 after overcoming a rough start. The 27-story tower and 33-acre campus, which has more than 50,000 square feet of meeting space, had an uncertain future after the Massachusetts Gaming Commission balked at granting a gaming license after the former head of its owner, Wynn Resorts, was involved in a sexual impropriety scandal. However, after reclaiming an industrial site on the Mystic River in Everett, Mass., the 671-room, $2.6 billion resort and casino is finally set to open with improved transportation links and a public park.

The ground-floor meeting rooms include the 37,000-square-foot Picasso Ballroom and seven other meeting spaces also named for artists. The largest, Monet, can host almost 200 for a presentation and 180 for a meal. Outdoor space includes two terraces and a 21,000-square-foot riverside event lawn.

Amenities include a high-end retail area; Sinatra, an Italian restaurant; Mystique, an Asian eatery; and a spa and fitness center.

Encore Boston Harbor has committed to spending $58 million to upgrade nearby roads and $208 million to subsidize a subway line and river ferry system to bring guests to the hotel and casino. It is five miles from Boston Logan International Airport.