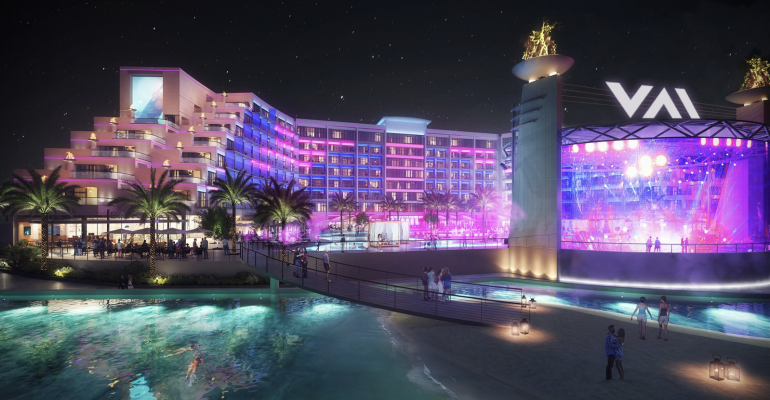 VAI Resort will have a 360-degree outdoor stage (at right) that faces not just a huge gathering space but also the balconies of nearly 180 guest rooms.
Destination & Venue News

Biggest Resort in Arizona Coming to Glendale in 2023

More than 1,200 guest rooms, 40,000 square feet of meeting space, and 13 dining outlets will wrap around an outdoor leisure and entertainment complex just west of Phoenix.

While most of the major hotels and resorts in the Phoenix/Scottsdale area lie on the east side of the “Valley of the Sun,” the city of Glendale on the west side will stake a major claim in the meetings and incentives market come spring of 2023, when VAI Resort will open.

Once that happens, VAI Resort will supplant the 1,003-room Sheraton Phoenix Downtown as the largest hotel in all of Arizona. On the pure resort side, the 750-room Fairmont Scottsdale Princess is presently the largest in the state. 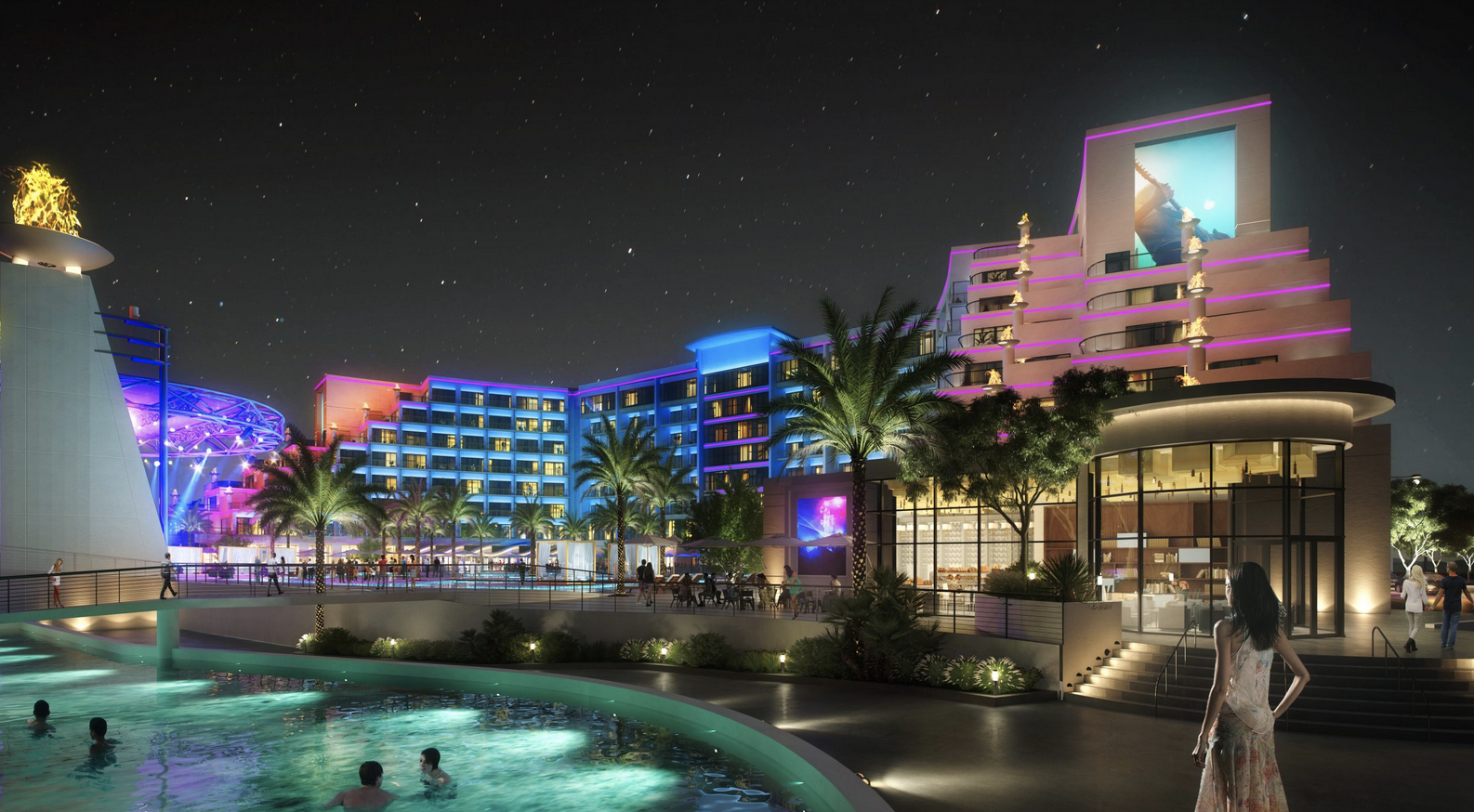 Located adjacent to the venue for next February’s Super Bowl—75,000-seat State Farm Stadium—the 1,220-room VAI Resort will offer a variety of water-themed recreational options as well as outdoor performances on a regular basis. To do that, the resort will feature huge lagoon-style pools that connect, along with a 52,000-square-foot island between them. That island has a 360-degree high-tech stage where more than 100 concerts will take place in the first year, according to Mike McLellan, the property’s COO. Nearly 180 guest rooms will have balconies facing the pools and the stage. In shoulder and low seasons, meeting groups will be able to use the island and stage for private functions.

As for business events, the property will have more than 40,000 square feet of dedicated meeting space, including two ballrooms. Details regarding the number and size of breakout spaces will be finalized in the coming months. Food and beverage options will include 13 restaurants ranging from upscale to informal. The resort will also have a 20,000-square-foot spa and wellness center, and a 400-foot tethered balloon that will allow guests to take in elevated views of the desert valley and surrounding mountains. 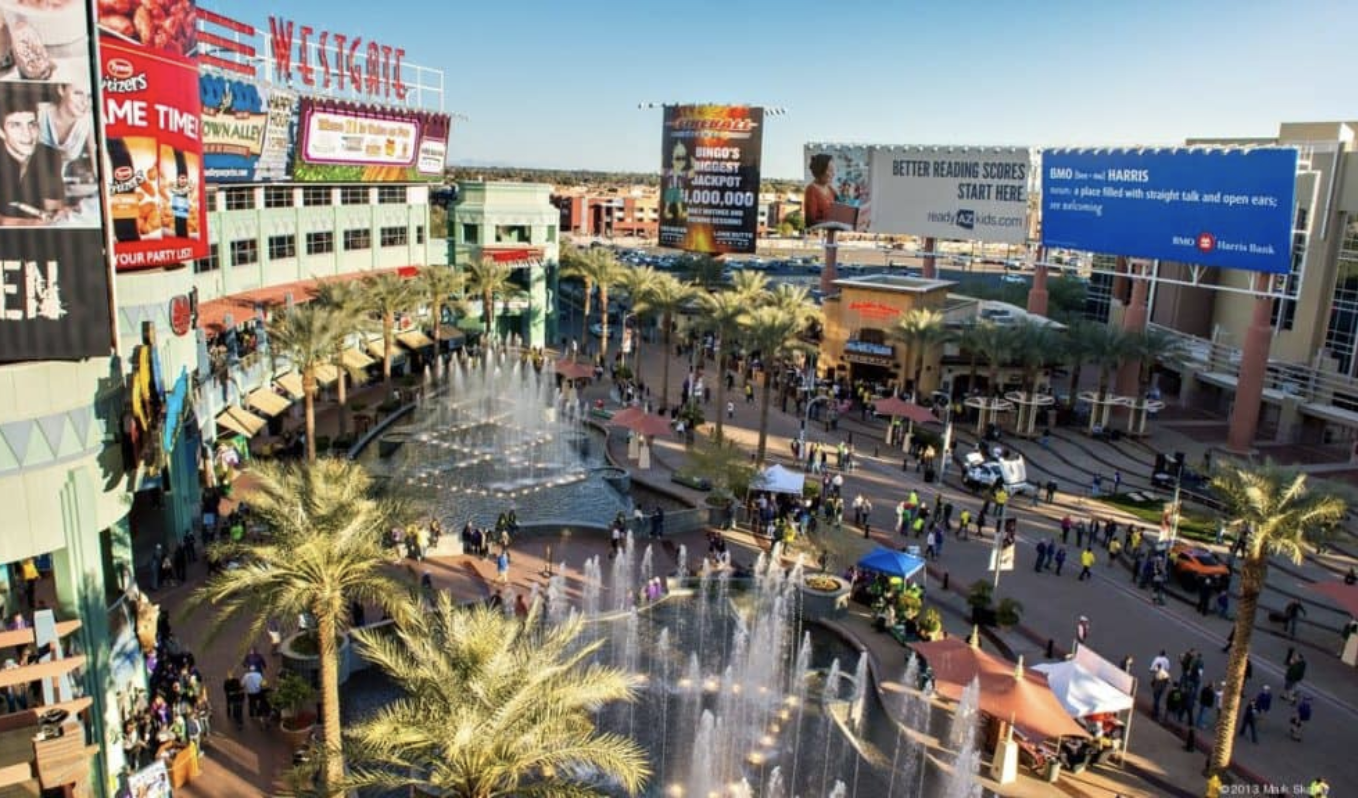 Less than half a mile from the property is the Westgate Entertainment District (in photo), featuring the 320-room Renaissance Glendale plus a dozen restaurants and bars facing outdoor pavilions that have water features with synchronized fountains plus large digital screens that groups can customize for private events. At one end of the district lies the 17,000-seat Gila River arena.