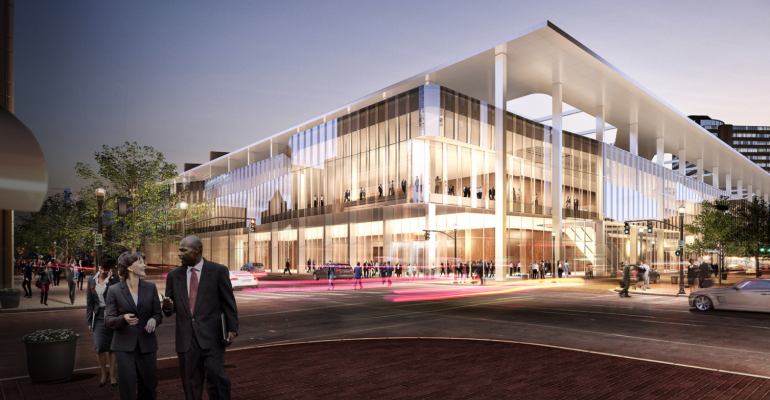 The new Kentucky International Convention Center is open in a LEED Silver–certified building which will allow for 34 percent energy savings. The new “green” building is expected to result in more than a 20 percent reduction in utility costs, and more than 70 percent of the construction debris from the old facility was carefully dismantled and recycled. Energy-saving, color-changing LED lighting in meeting areas and roof skylights in the lobby and prefunction space will contribute to the center’s power savings.

The expanded facility, formerly known as the Commonwealth Convention Center, has 200,125 square feet of exhibit space, 52 redesigned meeting rooms, more than 71,000 square feet of meeting space, and 86,000 square feet of prefunction space. There is also an expanded 40,000-square-foot pillarless ballroom and a 175-seat private theater.

Some of the first conferences booked into the new center after the two-year, $207 million build are the American Association of Cardiovascular and Pulmonary Rehabilitation, the Kentucky Bar Association, and the American Public Transportation Association. In its first two months, the center will play host to more than 28,000 attendees.

KICC’s kitchen facilities can supply up to 15,000 meals a day, and there is an onsite bar with an extensive bourbon selection, the Oak & Brew, which also serves grab-and-go items to event attendees.

The expansion has prompted an increase in lodgings in downtown Louisville from 17 hotels and 4,790 rooms in 2017, to 25 hotels and 6,316 rooms today. The Louisville Downtown Marriott and the Hyatt Regency connect to the center via a pedestrian walkway.