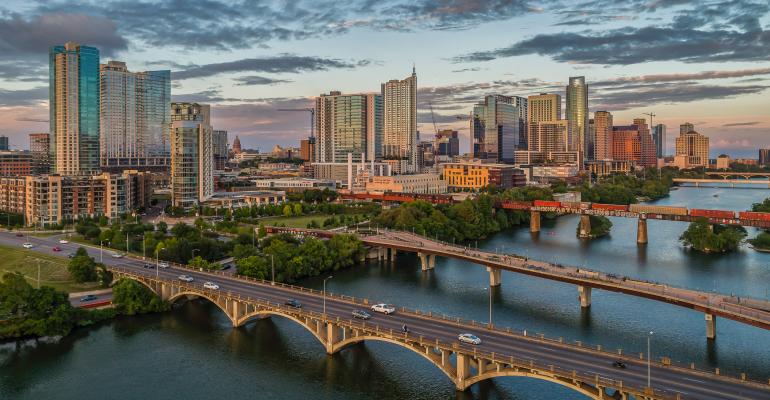 Austin to Add a Million Square Feet of Meeting Space

The city council supports an expansion of the downtown convention center, with additional pedestrian space and a roof garden.

Austin, Texas is set to expand its convention center while creating a more pedestrian-friendly downtown area. Austin City Council has greenlighted a $1.2 billion proposal to demolish parts of the Neal Kocurek Memorial Austin Convention Center and rebuild in the same location. The plan, one of the scenarios put forward by the Center for Sustainable Development at the University of Texas School of Architecture, would allow the center to continue to operate during expansion and increase the size of the facility by 545,000 square feet during phase 1, and by an additional 515,000 square feet during phase 2. The convention center would also gain underground parking and a roof garden and terrace, while pedestrian areas and new retail outlets would be developed around the building. The center will be reoriented to face Waller Creek, and a new pavilion in Waller Creek park will add more event space as well.

Financed by an increase in the area’s hotel tax, the plan also includes improvements to public transport to the convention center from area hotels and the conservation of the adjacent historic Palm Elementary School.

The current Austin Convention Center has 881,400 square feet of meeting and exhibit space, is served by 11,000 guest rooms in the downtown area, and is less than 10 miles from Austin-Bergstrom International Airport.