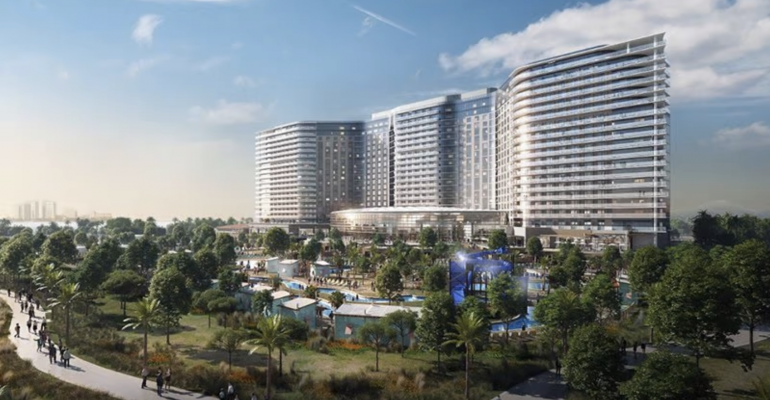 After Long Delays, Gaylord’s San Diego Project Is Getting Built

The 1,600-room Gaylord Pacific Resort and Convention Center is expected to welcome its first visitors to the Chula Vista Bayfront area in 2025.

On June 2, the City of Chula Vista and the Port of San Diego announced that $275 million in public bond funding cleared escrow, allowing construction to begin this month on the $1.35 billion Chula Vista Bayfront project—which includes the Gaylord Pacific Resort and Convention Center, a property that has been on the drawing board for more than 15 years. Estimated time to completion: three years.

This will be the sixth property for Gaylord—Marriott’s convention-focused hospitality brand—and the first Gaylord property west of Denver. The 1,600-room resort will have 275,000 square feet of meeting space across three levels, with four ballrooms and two outdoor event lawns. It will also feature several restaurants, a spa, a pool with a lazy river, and adjacent public promenades running along the southeastern corner of San Diego Bay and looking across to the Coronado peninsula.

Chula Vista and the Port of San Diego have worked for nearly 20 years to start the transformation of more than 500 acres of vacant and industrial land into a residential, parkland, and hospitality district. According to an article in the San Diego Union-Tribune, Chula Vista Mayor Mary Casillas Salas said right after the council and port approval votes that “we’ve been waiting for this project for literally decades. It wasn’t an easy deal—it was pretty complex, and it was a roller-coaster ride.” Port Commissioner Anne Moore, who represents Chula Vista on the port’s board, added that “there were multiple hurdles over the years in getting to where the bayfront project is now, but none was as challenging as those in recent years. Nobody could have imagined that we would have to deal with a pandemic and a war and supply-chain shortages and inflation,” which raised the total cost of the project by nearly $40 million.