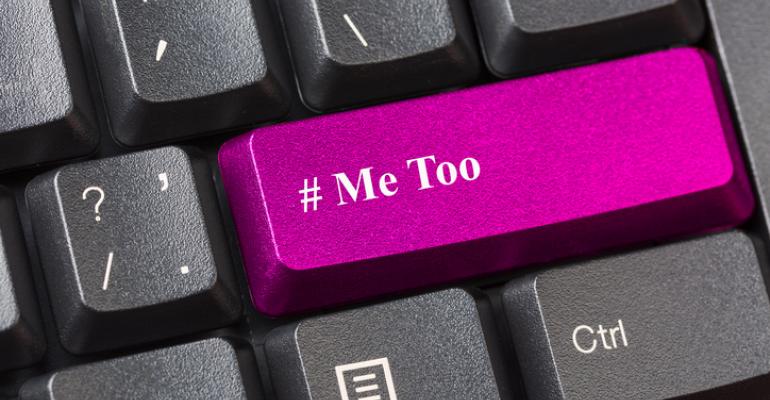 I Love Our Industry, but It's Not Immune. #MeetingsToo

I’ve been talking to a lot of people lately about sexual harassment in the meetings and hospitality workplace and at meetings and events, and we all have stories. #MeToo,
of course.

Like the boss who warned me during the interview not to take the job—which I desperately wanted—if I had a problem with being sexually harassed because he had a ribald sense of humor.
Like the top customer—who I thought I knew well and had met his wife and kids—who propositioned me. When I told my boss (see above. Yes, I did take the job), he was appalled that I had refused and worried that the customer might leave us as a result.

We all have our stories. In fact, I only spoke with one woman for this month’s cover story who couldn’t remember ever being sexually harassed. But then again, as she said, sometimes things slip our minds. I was speaking with a guy recently, who said he had never witnessed sexual harassment and couldn’t believe it was so prevalent. I reminded him of a conference we attended ages ago where two managers were showing a new hire—a young woman starting her first job—the ropes. After a cocktail or three too many, the men starting “joking around” about how she needed to have sex with both of them if she wanted to keep her job. We walked in as they started grabbing at her. We managed to get the guys to leave, and tried to reassure her that she wouldn’t lose her job. But, and I will always regret this, I never followed up or reported it to anyone. I’m pretty sure she didn’t either. My friend couldn’t believe he had forgotten that night.

I ’m worried that today’s #MeToo movement will eventually slip all our minds when another cause demands our attention, that these stories will go back in the closet, that we will forget instead of doing the excruciatingly hard work of stopping those in power (mostly but not exclusively men) from sexually harassing and abusing the less powerful (usually but not exclusively women).
This industry, in particular, offers what speaker, writer, and business strategist Courtney Stanley called the “imperfect storm” during a session on this topic at Meeting Professionals International’s World Education Congress in Indianapolis. The late nights, free-flowing alcohol, the unfamiliar environments away from home and family, all conspire to bring out the worst in some people. And meeting and hospitality professionals, especially early in their careers, often aren’t empowered to protect themselves from creeps.

I know, this is so uncomfortable to talk about. Almost everyone who has told me stories about being sexually harassed also feels shame about it, and worries that others will think less of them because it happened. Isn’t that bizarre? But it’s true.

We have a long way to go. But I believe it’s important to keep these conversations going, to chisel away at the societal and cultural pieces that support a harassment-tolerating environment, to continue to find ways to keep ourselves and our colleagues safe, and to put the stigma and shame on those who deserve it, not their victims.