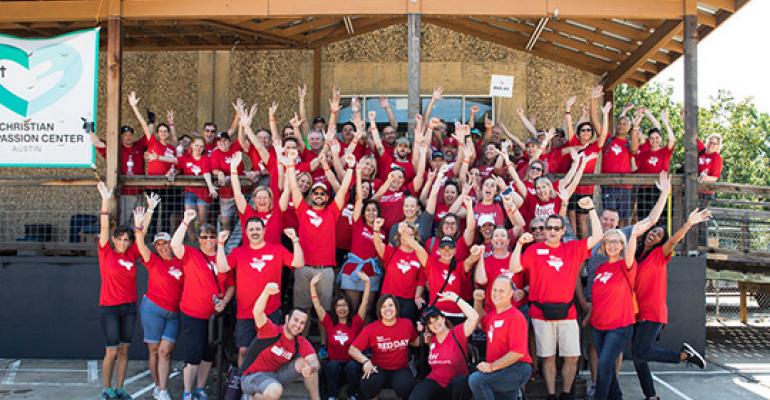 What would you do if, just 10 days out from bringing more than 7,000 participants to your second biggest meeting of the year, the mayor of your host city, Austin, Texas, announced that the convention center that was to hold your event would instead be housing evacuees from a devastating hurricane?
If you’re global real estate company Keller Williams Realty International facing the reality of Hurricane Harvey’s destruction in Texas just before move-in for your September 11–15 event, “It was a no-brainer,” says Mindy Grubb, the company’s executive director of events.

Instead of sessions and keynotes on the real estate industry’s latest housing and technology trends, and hearing from the KW executive team about the state of the company, KW associates fanned out across the city and the state as part of Mega Relief. The volunteers mucked out flooded houses, prepared meals for food kitchens, took kids shopping to replace back-to-school clothes lost to the flooding, and even cleaned and soothed more than 2,000 displaced pets through Austin Pets Alive.

For Grubb, Keller Williams CEO John Davis sums it up best. “He says, ‘This is our culture, this is who we are. We’re one family, and we’re always going to take care of our people.’ It was what we needed to do.”

Getting the Word Out
Once the decision was made, Davis announced the change in a company-wide video. KW’s international conference, he explained, would be transformed into a weeklong disaster response campaign that also intended to raise $20 million to help those hardest hit by Hurricane Harvey (and, as Irma boiled up the Eastern seaboard, for victims of that storm as well).

While the change meant a loss of millions in meeting-related revenues, “We had the hotel rooms, we had the buses, and we had the hardest-working, most compassionate real estate agents in the world,” Davis says. “We decided to do the right thing and leverage the energy and generosity of our associates to make a real difference in people’s lives.”

Most of those already registered for Mega Camp expressed enthusiasm for the changeup, says Grubb. “Our associates were already saying they wanted to come help, so it was a natural direction for us to go in.” In the end, about 4,100 opted to come to Mega Relief, putting in more than 60,000 hours of relief work over the four-day event. But a mega pivot brings with it mega confusion, as a quick skip through posts on the company’s Facebook site and Twitter feed makes clear. People had questions about registration fee refunds if they didn’t want to participate in a relief operation, how to sign up for Mega Relief if they hadn’t originally signed up for Mega Camp, and what housing was available in town given the other relief organizations and evacuees who would be needing hotel rooms.

“We had about 25 people from Keller Williams International headquarters who volunteered to answer those questions,” says Grubb. KW gave prior registrants who did not want to participate in the new event three options: They could have 100 percent of their $999 fee refunded; they could take a partial refund and donate the remainder to the relief efforts; or they could donate their full fee to the cause.

“The vast majority took the third option, saying,
‘I can’t be there, but please make good use of my money,” she says. They kept the original pricing for those who signed up specifically to take part in the new operation, and got very few, if any, objections.

Getting by with a Little Help from Their Friends
When the city of Austin changed its housing plan for Harvey evacuees just four days before the Keller Williams arrival, Grubb and her 13-person meetings team got their space back at the Austin Convention Center. KW used the center as its main rallying and supply drop-off point, working with the Red Cross, which already had set up headquarters in the center before KW moved in. “Part of our mission and vision at Keller Williams is that when we make a commitment, we stick to it,” says Grubb. “We definitely did that with the city of Austin and the Austin Convention Center. We worked closely with them to kick off Mega Relief, including managing changes to food and beverage.”

Further complicating matters was Hurricane Irma, which was making it impossible for some Florida-based associates to get to Austin for Mega Relief. “Our hotel partners were incredible about letting our associates from areas affected by Irma out with no penalties. They were truly understanding,” Grubb says. Of the 14 hotels KW had contracted with, eight are forgiving attrition, she adds.

Discussions are still ongoing with the remaining hotels, but the communication thus far has been positive. She credits long-term relationships with these hotels—KW is based in Austin—for helping smooth the process. “They understand our culture. They understand who we are and what we stand for,” says Grubb. “So when we pivoted from Mega Camp to Mega Relief, they weren’t surprised.”

“We decided to do the right thing and leverage the energy and generosity of our associates to make a real difference in people’s lives.”—John Davis

At the time of Mega Relief, the company’s nonprofit arm, the 501(c)(3) KW Cares, already had sent more than a dozen 18-wheelers filled with supplies to areas affected by Harvey, had a fleet ready to roll to help KW associates in Florida as Irma bore down, and had more than 3,000 volunteers already ripping out drywall and cleaning up more than 200 homes of Texas KW associates. But its mission is limited to helping the company’s associates, and KW wanted Mega Relief to reach out to all of Harvey’s victims.

KW Vice President Holly Priestner, who Grubb calls the “networking queen,” facilitated the partnerships with the relief organizations. “Because we are focused on disaster relief efforts during all disasters, not just [Hurricane Harvey with] Mega Relief, we have strong partnerships in place,” says Priestner.

Mega Relief organizers could leverage KW Cares’ established ties with the Salvation Army, and the company had worked closely with the Austin Disaster Relief Network during the 2015 flooding in Wimberley, Texas, so both those relationships were easy to activate.

While these connections were already established through the company’s nonprofit arm or past relief efforts, others happened in a very Keller Williams kind of way. “An agent introduced us to the Central Texas Food Bank,” Priestner adds. “In Houston, a cousin of a KW Realty International team member connected us to Second Baptist Church,” which served as a central point for coordinating Austin’s relief efforts. The other organizations in Austin were nonprofits that our team members volunteer with. Our culture is focused on serving others, which made identifying the partnerships simple.”

Another key player was Atlanta-based 414 Logistical Consultants, which KW has been partnering with for the past 12 years for its transportation needs. While they already had arrangements to shuttle participants between hotels and the convention center in Austin, KW was going to need reinforcements for those who were going to clean debris from flooded homes where Harvey had made landfall. “Even before we made the call that we were looking to move more than 4,000 people each day, they were already on it,” says Grubb. Because most of the local buses were already reserved by other relief agencies, 414 pulled buses from as far away as Mississippi for Mega Relief.

Creative Repurposing
With a shift of this magnitude taking place in such a short period of time, Grubb’s events team had to get creative. For example, they took the app that her team uses to manage internal staff scheduling, InitLive, and turned it into a volunteer-scheduling app for participants. And to cover liability concerns, associates had to sign off on a waiver before they could sign into the app to schedule participation in a relief activity.

And KW didn’t let those two-to-three–hour bus rides to Houston, Rockport, and other Harvey-hit areas go to waste, either. The coaching and networking that is central to the company’s culture—it was named the No. 1 training organization across all industries worldwide in 2017 by Training magazine—just went on the road. The company’s Mega Achievement Productivity Systems, or MAPS, division, headed by MAPS Coaching CEO Diana Kokoszka, already had more than 200 coaches lined up for Mega Camp, so it just popped those coaches on the buses, where they conducted sessions on hot topics on the fly. Says Grubb, “Mega Camp is about networking and being with and learning from your peers, so it was only natural to do this during their spare time on the buses.” Evening events that are traditionally hosted by the company’s various divisions after official conference hours also did a bit of a pivot. Grubb’s team first determined its commitments and liabilities relating to the planned evening events. Then they worked with Priestner to add some educational and relief components to existing events, and create some new ones. For example, on the first evening, KW turned an event featuring women leaders into a fundraiser for first responders. The next evening, the company held an event at the JW Marriott that featured Rockport Fulton High School Athletic Director Jay Seibert talking about efforts to bring his community back after the hurricane’s devastation. Proceeds from the ticketed session, which included a Q&A on leadership, went to help high school booster clubs in Rockport, Ingleside, and Aransas Pass, all towns that were hit hard by the storm. On Wednesday, the company pulled together a concert featuring local musicians and held a live auction at Stubb’s BBQ, an Austin concert venue that donated its space for the event. The concert and auction proceeds went to Port Arthur/ Beaumont and general Harvey and Irma relief.

Experience Strengthens Corporate Culture
With the event now in the rear-view mirror, Grubb says her only real surprise is that there really weren’t any surprises. Having the partnerships in place with the hotels, the city and its convention center, the relief organizations, and the associates—and having a strong leader with a big heart—is what made it all work relatively seamlessly.

“Our CEO John Davis’s vision, his ability to communicate that vision, his faith and empowerment of the team, the structure he put in place for feedback loops—these are the key aspects of what made Mega Relief a true success,” says Priestner.

And a success it was, according to the overwhelmingly positive feedback Grubb’s team has gotten. As one person noted in a Facebook comment, “Usually when I come to Mega Camp or Family Reunion I am in awe of the Keller Williams family and culture, and #MegaRelief has shown me that is nothing compared to what I have witnessed KW family members do in TX. This is a company that walks the talk. I have learned more in the past three days about myself, business, and why we all do this. This relief effort would not have been possible if KW didn’t have systems, models, tools, and a culture of abundance before this tragedy.”

Grubb adds, “I get teary-eyed just thinking about it, but the stories they came back with about the families they met, the places they helped out—they made an impact not just on those they helped, but even more on themselves. They feel humbled and grateful for every day. They have a new perspective on the world, and they’ve taken that back to their offices.

“The company overall is growing stronger from their experience.”