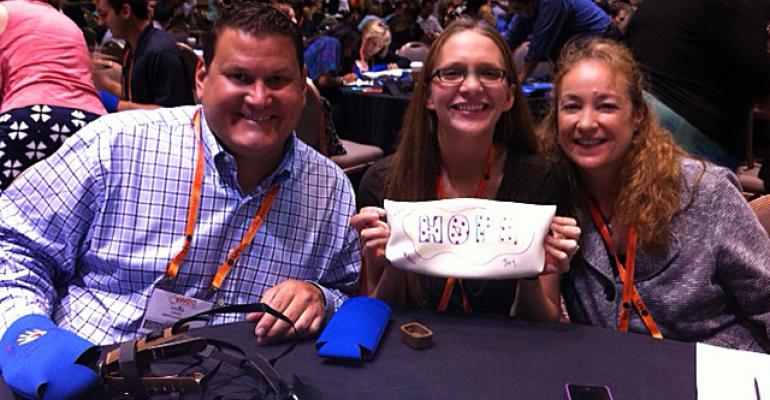 I’ve been holding off talking about the Helping Hands corporate social responsibility session at this year’s MPI World Education Congress because, well, it’s hard to put into words exactly how that felt. But was an incredibly powerful experience.

While I don’t have the exact numbers, by eyeballing the room I’d say there were well over 1,000 people in the ballroom (MPI had cleared the schedule for that session so there was no programming competition). We filtered in, looking at the materials laid out on the table and wondering what we had gotten ourselves into. Building a prosthetic hand to be given to a landmine victim who had lost their flesh-and-blood appendage sounded kind of daunting, but we were up for giving it our best shot.

Lain Hensley, whose Flashpoint presentation just blew me away earlier in the meeting, bounded (literally bounded. This guy exudes energy) onto the stage and gave a quick verbal and video introduction to what Helping Hands is and does (he's the co-founder and COO of Odyssey Teams, which offers the Helping Hands program). The sound system wasn’t being terribly cooperative, but leave it to meetings peeps (in this case, I'm pretty sure it was the meeting emcee Marvellous Mark) to come up with a solution:

Then each table broke into groups of three to start assembling. Lain had warned us that most people make their mistake on the first step, and our group was no exception. Once we got the doohickey set in the right direction on the framus, though, we were good to go—even though Lain had instructed us to put the cute blue koozies that were on the table over one hand so we could get a literal feel for some of what it’s like to lose that. And it was hard! There were a lot of things we had to do that took all three of us coordinating our efforts to get done to put that hand together. Which is also the point, of course.

Once the hands were assembled, we also were instructed to decorate the bags the hands would be transported and presented in, and to write a note to include for the ultimate recipient. Ours read:

“You are a special person and a gift to the world. We may never meet, but we will always hold you in our hearts. We hope this will help you to live your life to the fullest because you deserve all of life’s blessings. May you live long, live well, and love with all your heart.”

I’m still tearing up just thinking about how it felt to put that note in the bag, then take it up to the stage to pin it on the board with the rest of the hands. I think I heard that we built more than 250 hands in that hour-long session. Two hundred and fifty people will have better mobility and hopefully a better quality of life because of that one hour-long session.

I ran into one of my hand-teammates later in the day, and we were both still awed and honored to have been able to take part in something like that. When I’ve felt down, or overwhelmed, or all those other post-show come-downs I tend to get after something as all-consuming as WEC13 was, I think about that person, whoever he or she may be, and try to imagine how it feels to pick something up with that new hand. Never fails to make me smile.