/sites/all/themes/penton_subtheme_meetingsnet/images/logos/footer.png
Recent
Recent
A Snapshot of Sentiments about the Return to Meetings and Incentives
May 11, 2021
Philadelphia Gets Part One of a Dual-Branded Marriott
May 10, 2021
[Webinar] The Currency of Live Event Engagement
May 10, 2021
A Restored Washington Seminary Opens as a Hotel
May 07, 2021
Industrialist Hotel Opens in Pittsburgh’s Business District
May 06, 2021
Featured
Virtual Events: We’ve Reached the Tipping Point
May 05, 2020
The Meeting Planner's Risk-Management Resource
Mar 04, 2020
The Welcome Guide: Tools and Ideas for Inclusive Meetings
Oct 07, 2019
2020 Changemakers
Jun 02, 2020
face2face
brought to you by 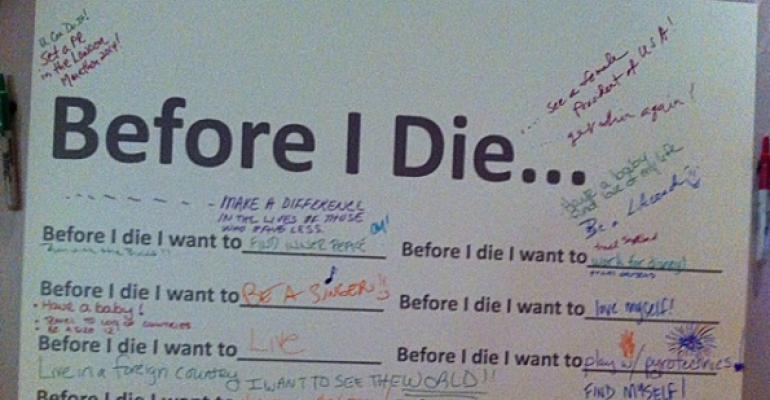 When playright Margaret Edson rocked my world at this year's Alliance for Continuing Education in the Healthcare Professions, I sincerely doubted anyone could move me like that again in a conference session. I was wrong.

Though she couldn't have been more different in topic or tone, oh my was TED Senior Fellow Candy Chang amazing. Before she came on stage, it was a cacophony of drumming and loud music and hoo-has, which while exciting and fun at first was starting to make this introvert feel a tad overwhelmed (well, that and the having to handshake, high-five, and hug everyone at my table at one point). Here, check it out:

Then Candy took the stage and, with a quiet, beautiful voice that enraptured me, wove an amazing tale of how she began to wonder if public spaces have the power to improve communities and the well-being of people who live in them.

So she made up stickers that said, "I wish this was____" and stuck them up on various storefronts and buildings in New York neighborhoods. The responses, she said, were the hopes and dreams of people across the neighborhoods (and they were everything from funny to creative to selfish to practical).

She later looked around at all the abandoned spaces in her post-Katrina New Orleans neighborhood and wondered what would become of them, and of the communities they stood in. How could those public spaces be used to bring people together?

She put up giant chalkboards on a building that asked people to answer this question: "Before I die, I want to ____." The response was an outpouring of dreams, desires, fears—from "I want to lose those 20 pounds" to "I want to be loved." The idea has now spread, with more than 250 walls now installed in 50 countries.

Anyway, I'm totally doing her a disservice by trying to capture it here. Go see this video of her TED talk for a taste, though she was even better live.

So how do you possibly follow that? I thought we were thoroughly wrung-out, but no, MPI got us again with an incredibly moving (my whole table was sobbing out loud at times) ...I was going to call it a presentation, but it was so much more than that. Called “Inspiring Our World,” real MGM employees got on stage to share how the perceptions people had of them did not match who they are inside, and how they've overcome hurts caused by prejudice to become the amazing people they are today.

They were so inspiring, and heart-wrenching, and they made me really think about how I may be judging people no matter how open-minded I like to think I am. In talking about the session later with another attendee, I said that it's so hard to overcome these urges to instantly judge people by appearance since we still have those animal vestiges that make us want to quickly assess whether or not someone is a threat to us, and "other" always feels threatening. We may not be able to stop those initial thoughts, but we do have a duty as human beings to be aware of them when they come up, and stop ourselves from acting on them.

Is that the best we can do? I'd like to think not, and these people inspired the heck out of me to be a better human being by being a more aware one, of trying hard to really see who someone is before making any judgments.

But then they broke out into a song, which made me wonder if they were just actors after all. But no, they really are MGM employees, I was later told, and in fact are part of a program that all MGM employees are shown to both showcase the company's diversity and inspire better understanding among everyone who works there. What a great idea!

One of my many favorite quotes: "You don't have to be one to stand up for one." Vowed then and there to make that my new mantra. Thanks MPI, for making me think and feel, and for inspiring me to become a better human being.

P.S. Love that the general sessions are being done in the round this year. Changes the energy completely. Emcee Marvelless Mark and DJ Spike also are keeping it wild. I'm adding this postscript in the Tuesday morning general session, and people are getting loud, singing and fist-pumping, and it's 9 a.m. Oh yeah. But no drumming this morning...