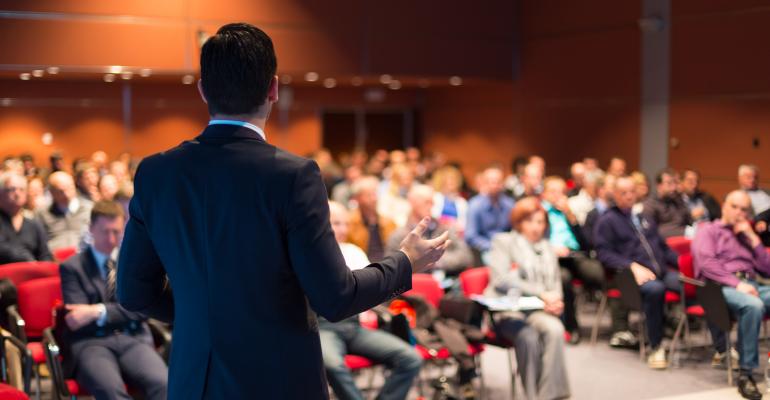 The American Society for Microbiology takes aim at a persistent problem.

The all-male panel continues to be a frequent phenomenon at many conferences, particularly in the tech and science professions. A report published earlier this year in the journal Nature Communications, for instance, found that between 2014 and 2016 men gave more than twice as many talks as women at the world’s largest geophysical conference, the American Geophysical Union Fall Meeting.

The issue persists despite the explosive impact of the #MeToo movement in the last two years and the rise even before that of popular websites like allmalepanels.tumblr.com, which mocks and documents all-male panels at events, seminars, and conferences.

In various articles and blog posts on the topic of how to rectify the paucity of women speakers and panelists at science conferences, the American Society for Microbiology is often pointed to as “a beacon of hope” for addressing the issue in a relatively short time frame. In 2011, women made up 27 percent of the speakers at the association’s annual meeting. By 2015, the percentage jumped to nearly 50 percent. How did they get there?

The short answer is that the society enacted changes following a 2013 article published by one of its members, Arturo Casadevall, a distinguished professor of microbiology at Johns Hopkins University. He analyzed speaker panels at past ASM meetings and showed that when the committee in charge of speaker selection included at least one woman, sessions had 72 percent more female speakers and were 70 percent less likely to be only male.

ASM leadership subsequently took three steps that led to a more balanced representation of women speakers at its annual meeting:

• The program committee for the conference was given data about gender-gap patterns among speakers based on previous meetings.

• More women were recruited as “conveners,” those who coordinate particular sessions.

• Conveners were urged to avoid all-male panels, but not banned from doing so.

“Among ASM members, women now constitute the majority of the students and post-docs and therefore represent the future of the society,” Casadevall wrote in a 2015 follow-up article in ASM’s mBio journal. “Since selection as a speaker is an important form of recognition that can carry tangible benefits with regard to career development, the achievement of gender equity at the ASM [annual] meeting will, I hope, convey the message that both genders are welcomed into the accomplished ranks of the society.”