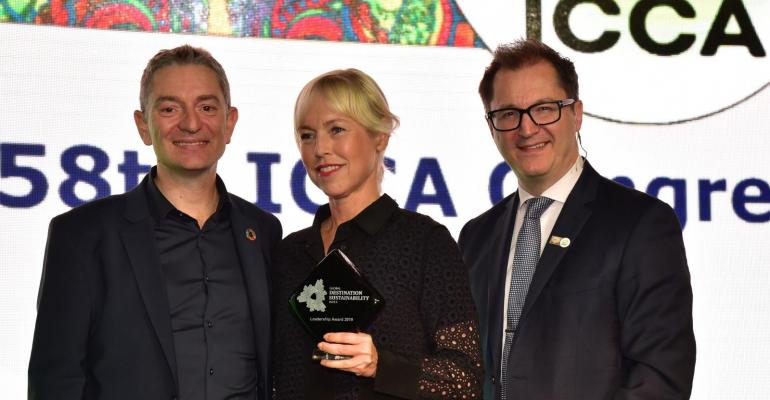 How Sustainable Is Your Meeting Destination?

According to latest the GDS-Index, released at this week’s ICCA Congress, if you’re meeting in Gothenburg, Copenhagen, or Zurich, you’re in good hands.

The Global Destination Sustainability Index winners were announced during the 58th annual International Congress and Convention Association Congress, and once more Europe leads the way with the top nine destinations followed by Melbourne, Australia, at number 10. Gothenburg, Sweden, has held the top slot for the last four years and this year managed to improve its score seven percent on last year’s, earning 89.64 out of 100 points.

The GDS-Index evaluates destinations in four areas: environment (air quality, waste, etc.), social issues (corruption, social progress, etc.), suppliers (hotels, airport), and destination management (strategy, governance, etc.) and assigns a score. The goal of the Index, launched in 2016 as a partnership between the ICCA, European Cities Marketing, IMEX Group, and MCI Group, is to provide event planners with sustainability benchmarks to use when choosing a destination. Fifty destinations submitted materials for evaluation in 2019.

Sydney, Australia, won the GDS-Index Innovation Award for creating partnerships to achieve a hospitality sector goal of a reduction of 70 percent in carbon emissions and divert 90 percent of waste from landfills by 2030. Other awards went to Wonderful Copenhagen’s Stakeholder Engagement program, Ljubljana Tourism’s Green Supply Chain project, and the Best Improver award went to Meet in Ireland. Only four U.S. destinations have joined the GDS-Index, and of those Denver, Colo., scored the highest grade of 60 percent.

Other ICCA Highlights
The GDS-Index Awards were announced in Houston during ICCA’s annual event, which was held October 27-30 and attended by almost 1,000 delegates from 75 countries. During the event, ICCA recognized Ulrike von Arnold, deputy director of the Vienna Convention Bureau and former ICCA board member, with the Moises Shuster Award for leadership.

It was the first time that a U.S. location has hosted the event since Albuquerque, N.M., in 1987. The theme of the conference, Innovation and Technology, was appropriate for a destination associated with NASA and featured a talk from former astronaut Scott Parazynski and a tour of the Houston Spaceport.

At the conference, ICCA announced it will bring its Association Meetings Program to Calgary, Canada, in 2021—the first time ever in North America. Before then, the 2020 edition of AMP will be in Tirol, Austria, June 29 to July 1. Other talk of the conference was the news released in mid-October of an “ICCA Association Community” launching in January. The new membership category will formalize the group’s relationship with association meeting executives.