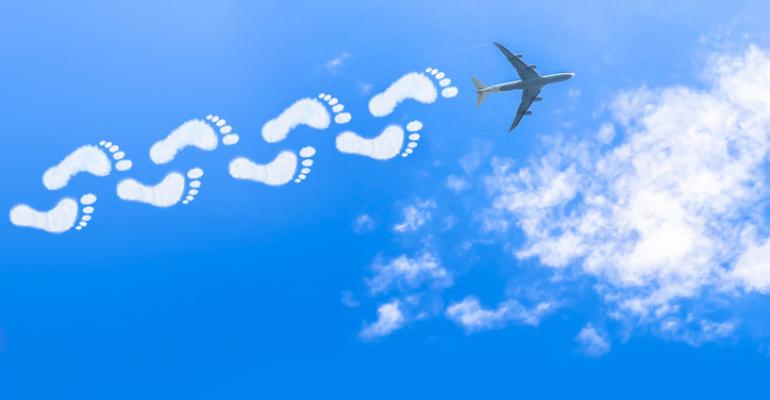 COP26 Had a Huge Carbon Footprint. Your Meeting Doesn’t Have To

When evaluating meeting destinations, consider that air travel is the number-one contributor to carbon emissions. Do you know what’s second?

Good intentions won’t make your meeting sustainable. If they did, the United Nations climate summit that just wrapped up in Glasgow, Scotland, would surely have a miniscule impact on the environment. Instead, organizers of the global sustainability conference, known as COP26, are looking at a carbon footprint that’s roughly double the impact of the last COP meeting held in 2019.

Sustainable fuel has the potential to dramatically reduce the carbon intensity of flying, but currently represents less than 0.1 percent of global aviation fuel due to cost barriers and low demand, according to this article in MarketWatch.

In a recent webinar hosted by the Society for Incentive Travel Excellence, Shawna McKinnley, principal at Clear Current Consulting, and former director of sustainability for MeetGreen, highlighted destination selection as among the most important factors meeting organizers could consider as they look to improve sustainability metrics.

McKinnley, who also teaches a course on sustainability in the event industry at the British Columbia Institute of Technology, worked with her students during the Covid pandemic to research the most important choices planners can make to host a low-carbon experience. “We dove into some actual carbon-footprint calculations for events that we had looked at before the pandemic and we started to pull on those threads. If we did things differently, what would happen to our carbon footprint?

They learned that destination selection is the most critical choice from two perspectives: first, the carbon footprint of air travel. For example, in an analysis of a North American group considering three prospective destinations in Asia, one location had a 30-percent smaller carbon footprint from flights. “The impact was equivalent to taking 10,000 bags of trash from the landfill, so it wasn't a small amount of carbon being saved.”

“The other thing that we didn't know was so important was the type of energy used in the destination. It’s a question that we’ve never asked: Where’s the power coming from for the venues and hotels?” She learned that the difference between destinations powered by clean sources, such as hydroelectricity, and destinations that rely more on fossil fuels can greatly impact a meeting’s overall carbon footprint. “In extreme cases, the low-carbon destinations can save about 100 kilograms of carbon per night, per room. And that adds up over a five-day experience to keeping 70 barrels of oil in the ground—and we’re talking about 50 people on a trip.”

McKinnley’s research also revealed the importance of food choices to an event’s overall footprint. While she understands shifting entirely to a low-carbon, plant-based diet is probably too risky for most planners, incremental changes can help. “Even going meat-light can reduce the impact of menus by 35 percent to 40 percent.”