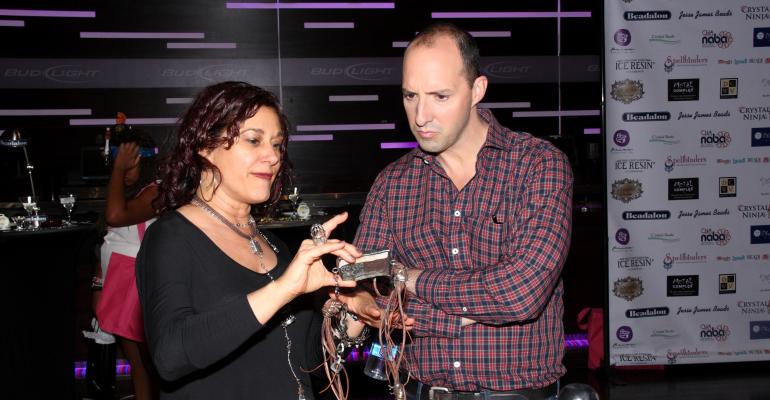 <p>Emmy winner Tony Hale from HBOs Veep looking at jewelry made by one of CHA&#39;s sponsors at the 2013 Emmy Awards.</p>
Association Conventions and Expos>Sponsorships

Sponsors today need more than a logo on a banner. Under pressure to deliver a return on investment, they’re responding to sponsorship opportunities that deliver content, networking, or face time.

From interactive mobile games and educational sessions to beer gardens and celebrity face-to-face events, here are 10 creative sponsorship ideas from the trenches.

As part of the Craft and Hobby Association’s strategy to provide sponsors with year-round touch points, CHA became a “title sponsor” for the 2013 Emmy Awards. This allowed CHA to host the Connected Gift Lounge at Club Nokia across the street from the Nokia Theatre in Los Angeles the night before the show. CHA offered space in the gift lounge to 13 of its sponsors, providing them with a unique opportunity to reach key Hollywood influencers. CHA sponsors showed off their wares—in this case, jewelry—and let the actors make their own jewelry at crafting stations. “Lou Diamond Phillips fell in love with one of the sponsor’s bracelets and said he wanted to wear it in his next movie,” says Suskavcevic, president and CEO of CHA.  Others who stopped by included Emmy winner Tony Hale from HBO’s Veep and actor Mekhi Phifer. The sponsors got great brand exposure and social-media buzz from the event.

September’s Emmy Awards were CHA’s second foray into entertainment industry sponsorship. It created a similar opportunity at the Teen Choice Awards in August 2013. The young actors loved the jewelry and would take pictures wearing it then tweet it out to their followers. The programs were so successful that CHA is doing the same thing in 2014 at the Academy Awards.

“We're complementing the entertainment industry’s natural affinity to creative expression with our own,” says Suskavcevic. ”It expands the awareness of the craft industry and exposes it to people that may not have been aware of it.”

The most sought-after sponsorships at the National Association of Broadcasters annual meeting, the NAB Show, are called Info Sessions, where sponsors purchase a two-hour block of time to hold an educational session in a breakout room. NAB promotes the event, and the sponsor delivers the education. “We recommend that they talk on a larger scale and don’t do infomercials,” says Heather Schuster, director, advertising, sponsorship, partnerships at NAB.

By giving sponsors an educational forum, it satisfies their desire to be seen as thought leaders, not just the opening act for the keynoter. Although the latter has its place for those who want visibility, Schuster says, others want to connect with a targeted audience.

NAB also sells sponsorships for its Super Sessions, which highlight the hot technologies for the year. A company can connect itself with the session that relates to what it sells.

PAX Prime, a show for video gamers, created a QR code scavenger hunt on its event app with the help of Guidebook, a company that develops mobile apps for events and conferences. For the major sponsors, Doritos and Mountain Dew, this interactive event generated huge brand awareness via he app, on banners and displays throughout the Washington State Convention Center in Seattle, and through social media buzz.

Attendees earned points for each of the 110 QR codes they found around the convention center and throughout Seattle. Points could be redeemed for prizes (t-shirts, sunglasses, skateboards, etc.) in an on-site marketplace, and top point earners were entered into a drawing to win one of 30 Xbox Ones. The game was a hit with the 6,000 people who participated and the sponsors. Mountain Dew and Doritos representatives were on stage for the Xbox drawings. During the show, 2,000 tweets about the game reached over 5 million Twitter followers.

SmithBucklin designed a “Call for Challenges” sponsorship for one of its clients to tie sponsors to thought leadership. SmithBucklin reaches out to the association’s members to submit business problems that need solutions, and the staff then selects a few of the submissions and creates sponsorship opportunities around them, explains Tom Myers, vice president, sales services, at SmithBucklin. Depending on the particular business problem, they seek out potential sponsors with a product, service, or expertise that addresses the issue. The sponsors are then asked to facilitate or lead a session on the subject—not to have them do a commercial, says Myers, but to give them a chance to show their expertise or expound on trends.

NAB has added “digital” as a fourth category of sponsorship—complementing its three more traditional areas: print, signage, and events (luncheons, keynotes, etc.) It’s working hard to expand its digital opportunities and has even hired a team to do video production for exhibitors and sponsors that want to upgrade their packages and place promotional videos on the conference Web site or mobile app. “We’re trying to make it turnkey for them,” says Schuster.

Digital opportunities include in-transit videos on shuttle buses, promotions on digital signage, and video ads on Web sites and in the convention hall.

A popular sponsorship opportunity offered by Kellen Co. is demonstration kiosks, explains Phelps Hope, CMP, vice president, meetings and expositions, Kellen Meetings. They are computer stands where attendees can learn about the sponsors’ products and services at their own pace. “You can scroll through one or the other, and you don’t have the sales guy hanging over you—you can do it on your own time,” says Hope. The kiosks are usually placed in break areas or main traffic-flow spots in the convention center, but not in the exhibit hall. For sponsors, it provides hands-on exposure outside the booth and reaches those who avoid the more high-pressure sales environment of the trade show floor.

Demonstration mailers are similar to demonstration kiosks, except, as the name suggests, the product demos are sent via mail or e-mail. For sponsors who sign up for this package, product demos are sent out in pre-show mailers, either as a link to a Web site (if sent via e-mail) or a flash drive (via mail). “Technology on paper does you no good,” says Kellen Meetings’s Phelps Hope. “You’ve got to get that word of mouth going, and that’s where the demos come in.” People can experience the product before the show, not just read about it, and that will drive interest and traffic to the booth during the show. If the pre-show mailer contains a link, it’s a link to a restricted Web site accessible only through a personalized URL.

Wi-Fi is a growing expense for meeting organizers and a hot opportunity for sponsors to get in front of a captive audience. The North American Christian Convention has two main sponsorship strategies to offset Wi-Fi costs for its annual meeting. First, it sells a sponsorship for The Hub—the conference area with free Wi-Fi and a bank of hardwired computers for attendees’ use. The sponsor has its name displayed on banners, signs, and the computers’ screensavers, among other places, and is invited to have brochures and business cards throughout The Hub.

NACC’s executive director Larry Collins explains that he also offset Wi-Fi costs at a recent meeting by selling commercial spots to sponsors that played on the monitors throughout the convention center and was streamed out to remote attendees in 47 states and 27 countries.

9. Where Everybody Knows Your Name

As a way to give sponsors face time with attendees, SmithBucklin developed a Beer Garden sponsorship. They created bars around the exhibit hall for an after-hours reception, but instead of bartenders, they had the sponsors pouring the suds and meeting those attendees face-to-face in a relaxed, fun environment.

The Food Marketing Institute designed an arena of sorts in the middle of its trade show floor, complete with bleachers, for the Supermarket Chef Showdown—an event it created to showcase the talents of supermarket chefs. The competition also proved to be a fantastic opportunity for sponsors, says Phil Lempert, CEO at The Supermarket Guru, a media and event production company that produced the event for FMI.

Recipes were submitted and judged throughout the year with 25 finalists advancing to the showdown at the annual meeting, where the Grand Chef is named after an all-day competition.

For sponsors, the event offers significant exposure. First, the chefs have to use sponsors’ products in their recipes for the competition. FMI then publishes and distributes the winning recipes (with sponsor ingredients) to the supermarkets. Consumer and industry media is invited to the showdown, providing even more buzz for sponsors.

The day after the event, sponsors are allowed to do their own product demonstrations in the exhibit hall. Their branding is also on all showdown-related materials, including a magazine with bios on all 25 finalists.

What's Working and What's Not