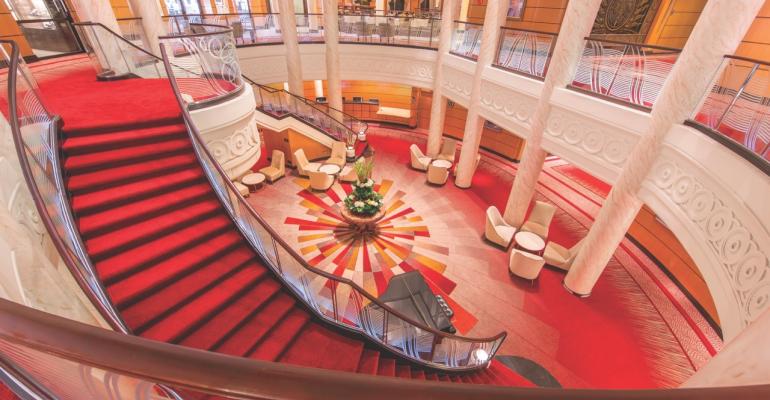 Few ocean-going vessels attract the attention of Cunard Lines’ Queen Mary 2. With the company’s seafaring pedigree dating back nearly 200 years, and an aura of royalty, the ship turned heads with its debut in 2003.  And it’s doing it again with a $132 million “remastering” that polished up staterooms and dining areas and pushed aside bulky elevator banks, all the while retaining the glow of a bygone era.

Indeed, the Queen Mary 2 is the only ship that offers regularly scheduled service “across the pond,” and Cunard officials jump at the chance to emphasize the difference between an “ocean liner” and a cruise ship. As an ocean liner, the Queen Mary was built for speed, with a design specifically for those trans-Atlantic voyages.

While the mechanicals were upgraded and the hull got a fresh coat of paint, the improved passenger experience is what is most striking.  The elevator shafts have been moved from the central atrium, allowing for a more elegant entrance, and the formerly underutilized Winter Garden has been remade in into the Carinthia Lounge, offering all-day dining and, of course, tea.

All of the ship’s 157 upper-class Princess Grill and Queen’s Grill Suites—named for the restaurants where those passengers dine—have been completely redone with new furnishings, paint, artwork, and carpeting, while the Britannia-class staterooms are expected to be renovated by the end of the year.  The vessel now offers 1,355 staterooms: the redesign allowed room for 50 additional Britannia-class rooms, including 15 single berths for passengers traveling solo.

The ship’s dedicated meeting space—three interior rooms, tucked into its Cunard ConneXions business center, that can join together to host up to 120—was not included in the renovation. Other spaces available to groups include Illuminations, a shipboard planetarium also used for movies and lectures, and the 1,105-seat Royal Court Theater, which got a new LED wall in the refit.

The Queen Mary 2’s top-level accommodations, also completely revamped, include five two-story apartments overlooking the ship’s stern, each with a glass wall taking full advantage of the view. Measuring between 1,566 and 2,249 square feet, each suite features a private exercise area, balcony, and three bathrooms. All five duplex apartments can be combined to create a single living area totaling more than 9,000 square feet, a grand suite unrivaled on any other passenger ship.

With the royal connections come some unique quirks. In addition to classically British service and tradition, the Queen Mary 2 is also the only passenger ship to carry dogs and cats. The Duke and Duchess of Windsor reportedly enjoyed traveling with their pugs, and so do modern day passengers. The service is so popular that Cunard doubled the number of kennels to 24 during the refit and added a lounge for owners to visit with their pooches at sea. So even pampered pets can experience a splash of glamour.