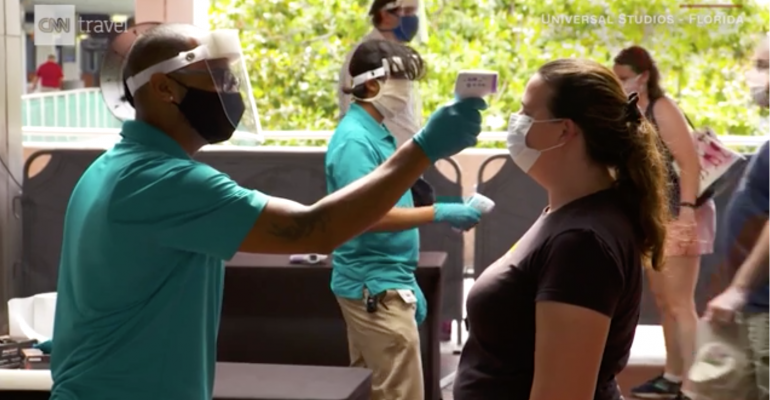 A Tale of Two Policies: Theme Parks and Casinos

Thirty years almost to the day that Universal Studios Orlando first opened in 1990, the park reopened to visitors after a three-month shutdown due to the COVID-19 pandemic. Park season-pass holders and those with previously booked tickets were the first visitors allowed to return, and the park is now accepting bookings from non-pass holders. This video from CNN shows park visitors wearing masks after an initial temperature screening at the entrance, and Twitter reports any lines for rides were fast-moving and spread out because of the reduced capacity. Even this duck appeared to be social distancing in a marked area:

If a duck can social distance at Universal, so can you pic.twitter.com/GgtTOzqijF

Despite most of the park activities being outside, Universal Studios Orlando is requiring guests to wear masks except on certain rides, in designated rest areas featuring limited seating, or while eating.

In contrast, photos from Las Vegas show many visitors in crowded casinos without masks. While large meeting hotels and resorts on the Strip have thermal screening and other safety measures in place, including these at the Wynn and Encore, this video shows Nevada Governor Steve Sisolak standing in front of a sign for "Le Rêve," a show playing at the Wynn, saying, “I’d say half of the visitors or more are wearing masks.” It’s not clear if he means specifically at the Wynn or at all properties he had toured on the Strip. In the same video, Sandra Morgan of the Nevada Gaming Commission, says gaming agents are coordinating with casino security to strongly encourage people to wear masks, although she confirms that they cannot require guests to wear them.

While COVID-19 hospitalizations in both Orlando and Las Vegas are on the decline it will be interesting to see which policy will remain in place until a vaccine is available.