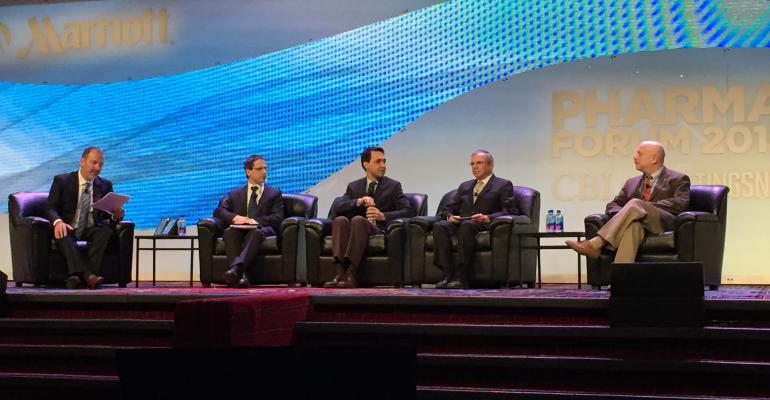 Pharmaceutical, biomedical, and other life sciences meeting managers plan a lot of meetings for healthcare providers. They are masters at juggling the spend-tracking and reporting requirements and the concerns of the physicians who wonder what exactly is going to show up on their “report card” on the public database. They try to satisfy their HCPs’ sophisticated palates and stay within their often-stingy meal caps. And they do all this while helping their participants accomplish the meeting’s goals.

But what do HCP participants think about all this? At Pharma Forum 2016, co-organized by MeetingsNet and CBI, a panel of physicians opened up about how they really feel about the life sciences meetings they attend. Here’s some of what they had to say.

Rules and Regulatory Concerns
Michael Shannon, MD, chair of the endocrinology/diabetes team and lead provider informaticist (medical specialties) with Providence Health and Services, said that he was concerned when Open Payments—initially called the Sunshine Act section of the Affordable Care Act—first came out, allowing patients to study the public database that lists all the financial transactions made between a pharmaceutical company and a physician. “But not one patient has asked about Sunshine,” he said.

It’s not so much the patients who are concerned as it is the institutions, said Leslie Citrome, MD, MPH, clinical professor, psychiatry and behavioral sciences, New York Medical College, and editor-in-chief of the International Journal of Clinical Practice. “Some are concerned about the perceptions people might get about their institutions” if they see their physicians listed as receiving large amounts of cash from pharma companies.

And yes, they are concerned about errors being introduced into the database. Stephen Permut, MD, JD, chair, board of trustees with the American Medical Association, said that the “AMA would like to see more collaboration so errors can be corrected before the data gets to the Open Payments system.” Companies should alert physicians when a report is made about a transfer of value so they can correct any errors before it goes to the Centers for Medicare and Medicaid Services, which runs the Open Payments database. “Once it goes to CMS, it’s much more difficult to correct.”

The panelists agreed that continuing medical education, patient education materials, and journal reprints should, as Permut said, “absolutely not be reportable.”

Meal Cap Madness
Meal caps are always front of mind for planners, but for docs, not so much. While Permut would like to see some consistency in what companies allow, along with a better error-reporting system, panelist Edwin Borman, MD, medical director, Shrewsbury and Telford Hospitals NHS Trust in the U.K., said that most physicians just want to be treated decently.

While they do chafe when they see a sign saying a mediocre meal will constitute a $70 transfer of value when it gets reported to Open Payments, they’re generally OK with the food and beverage they are offered under the meal caps.

And it gets crazier for meetings with multinational participants. In those cases, planners typically price meals according to the participant country with the lowest meal cap. In one case, though, a planner had to provide a voucher for a Greek physician who couldn’t be fed at the venue because the Greek food and beverage limits were so low.

The physicians found some of the other restrictions a little weird, too. One talked about having to fly to a meeting two hours away rather than hiring a car service. The car service was much cheaper and convenient but didn’t pass the “sniff test” for ethical spending.

Now that spouses aren’t allowed to join, physicians aren’t very interested in lingering, they agreed. That’s why airport hotels are fine with them as meeting venues. “I wouldn’t pick one for date night, but they’re good to go in, do the meeting, and get back out,” said Shannon.

Chilling Effect on Speakers
With speaker fees now reportable as transfers of value, some physicians are shying away from participating in meetings because they don’t want any transfer of value to be disclosed via Open Payments. It has had a chilling effect on the number of speakers now available, Citrome said. “Institutions have limited the HCPs they will allow to speak. There is a smaller pool of speakers now, and some may not be the most well-versed in the topic.”

Permut added that the AMA no longer allows its employees to speak at pharma events. “One person I know had been paying for his medical education by speaking. This has had a huge financial impact on him.” Shannon said that, while his organization doesn’t prohibit speaking, “You have to explain the value to the institution.”

It is harder to recruit new talent for pharma speakers bureaus as well, said Shannon. “I said 10 years ago that we were the youngest in the bureau—and we still are.”

Even for those who still are willing and able to speak at pharma events, some companies have gotten more restrictive. “Some ask to check every slide,” said Borman. And all that scrutiny could make potential speakers decide not to participate after all. “Please treat me as the professional I am. Get the balance between free speech and compliance correct.”

Permut added, “There’s a loss, and it can hurt patient care because the physicians aren’t getting the latest information.”