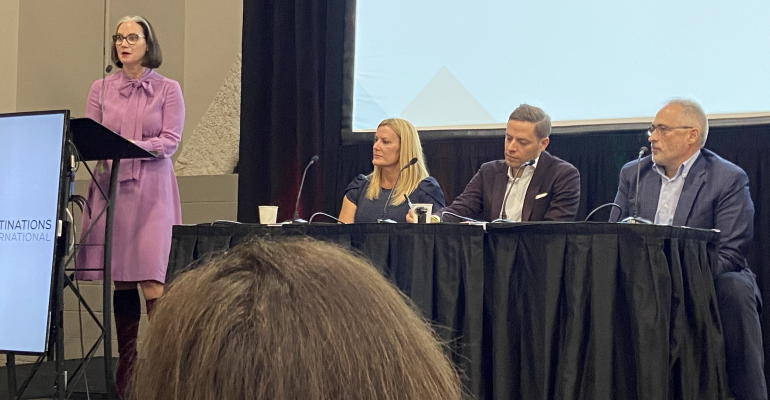 The Push to Formalize Citywide Bookings

The agreements that large conventions and shows have with their destination hosts is often a handshake. Destinations International wants to change that.

Destinations International’s campaign to create best practices around destination booking agreements for large shows is gaining traction. Representatives from the association’s Large Market Roundtable hosted a media event at the IMEX America show in Las Vegas to discuss changes needed to protect both cities and citywide groups when cancellations happen.

A lack of accountability between CVBs and their largest clients isn’t a new problem, although the pandemic has amplified it, said Melissa Riley, chair of the Large Market Roundtable and vice president, convention sales and services at Destination DC. Two years ago, the Roundtable surveyed the CVB community and learned that 55 percent did not have any specific accountability in their letters of intent. “That’s unbelievable,” she said. “We're one of the few industries where this amount of money or services are exchanged on a handshake. Our intent is to correct that moving forward.”

The focus of the committee is to create a tool kit with guidelines around performance clauses, deposit schedules, transfer of ownership of an event, and rebates and other incentives. A communications effort aimed at Destinations International’s members is already having an effect, says Riley. “As a result of the roadshow that we have collectively been on, 70 percent of those same [survey] respondents are now moving towards accountability within their letters.” Formalizing relationships that way can protect the planner and the city, she says.

Visit Indy has had formal booking agreements for years, and Kingi noted that his city saw the benefit of formal agreements during the pandemic, when large groups typically rebooked rather than canceling because of the terms they had agreed to. He says the booking agreements might be a competitive disadvantage when a citywide is also looking at destinations that aren’t asking for booking protections, but that the benefits outweigh the challenges.