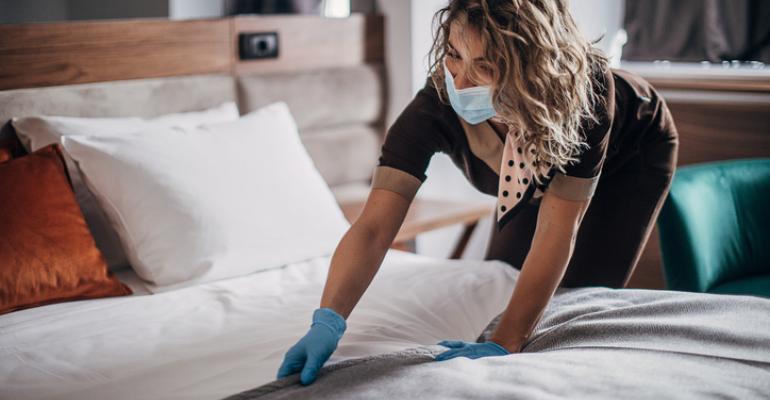 Citing the tens of millions they spend on events at Hilton properties, 17 unions are pressing the hospitality company for daily housekeeping services during their upcoming meetings.

Hilton Hotels announced a new policy in July to opt guests out of daily housekeeping unless they specifically ask for it. AFL-CIO President Liz Schuler responded last week with a statement that such a policy “is terrible for guests and workers.” Further, she noted that “unions host myriad conventions and other events each year.”

As a result, 17 labor unions have said they will review their event contracts with Hilton to ensure that daily housekeeping services are included. “Labor spent $103 million with Hilton in 2018 and 2019,” Schuler added, and “we’re going to make sure we are getting the services we pay for.”

But Hilton is not the only major hospitality company to move to opt-in housekeeping, and it still provides daily housekeeping at its Waldorf Astoria, Conrad, and LXR brands. Back in June, Marriott sent an email to its Bonvoy loyalty-program members noting that “daily service is automatically provided at our Luxury hotel brands and available on request at our Premium and Select hotel brands.” Among the brands in Marriott’s Luxury group are Ritz-Carlton, W Hotels, St. Regis, and JW Marriott, while the Premium brands include Marriott, Renaissance, Sheraton, Westin, Delta, Le Meridien, Autograph, and Gaylord Hotels.

The largest union for hospitality workers, Unite Here, estimates that if the major brands across the hotel industry chose to end daily housekeeping service, as many as 39 percent of hotel housekeepers nationwide would lose their jobs. In a mid-October press release, Unite Here cited commentary from Hilton CEO Chris Nassetta in February that “the work we are doing right now…is about [making hotels] higher-margin businesses and creating more labor efficiencies, particular in the areas of housekeeping, food and beverage, and others. When we get out of this crisis, those businesses will be higher margin and require less labor than they did pre-Covid.”

Another issue for Unite Here—60 percent of whose members are presently unemployed—is that the jobs of remaining housekeepers would be more difficult because guest rooms that have not been serviced every day require deeper cleaning.

Site-Selection Can Be Political: Protect Your Organization
May 26, 2022