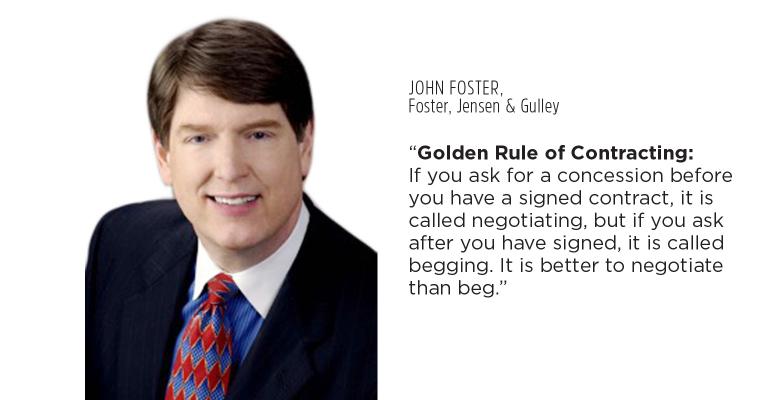 Contracts 101: The Golden Rule of Contracts

Attorney John Foster says it is better to negotiate than to beg.

There are things that meeting planners do that they don’t realize can jeopardize things even before they start. I always advise them not to announce a meeting destination ahead of time, even if their board has made a decision, because the venue will know they won’t walk away from a bad deal. And always leave enough time to negotiate.

Many years ago I reviewed a contract from a convention center and sent it back with counterproposals. The convention center returned it, refusing all of them. I sent some emails and finally set up a time to talk on the phone. I went through each counterproposal and the sales person on the line simply said “no” to every single one.  When I pressed him, he said it was not their policy. Finally I asked him, “Did your boss tell you to get on the phone with me and just say no?” And he said, “Yep, that’s exactly it.” I had wasted a lot of time with people who were really not negotiating in good faith. I finally got someone on the line who had the authority to agree to our counterproposals, and we got most of what we wanted, but I still see this guy in the industry 20 years later, and I’m sure this is still his strategy because many meeting professionals probably just give up.

One non-negotiable I advise people to think about before they start a negotiation is the force majeure clause. Mine is already a page long. I do presentations in the industry called “When Bad Things Happen to Good Meetings” because we have to adapt our contracts to reflect things that a few years ago we would never have thought about. Before 9/11, we never thought about terrorism in the U.S.; now it is a standard.  When the SARS epidemic hit Toronto, the American Association for Cancer Research had to cancel a huge conference with 18,000 people. The hotels from the city sent a bill for $6 million to cover the loss, but we managed to go into mediation and paid a small percentage of what was in the contract. The group had convention cancellation insurance that was initially turned down, but we finally convinced them to honor the claim. There was just no way for the conference to go ahead. Maybe it could have if the attendees were not in the medical profession but most of them were doctors and would have had to go into quarantine for two weeks before going back to their hospitals. It was just not practical. They had to cancel. I was sympathetic—the city of Toronto wasn’t at fault, but epidemics are a known risk now, and you have to have a cancellation policy in place to protect you whether it is SARS or Zika or something we haven’t heard of yet.  Look at the location of the event and consider the risks, for example, I updated my force majeure clause for some cities after Hurricane Katrina.

• Work with someone with the authority to negotiate. Don’t let them say no just to run out the clock.

• Look at risks in your event’s location and time of year, and update your force majeure clause accordingly.

More cautionary tales to keep you out of the Negotiation Hall of Shame.