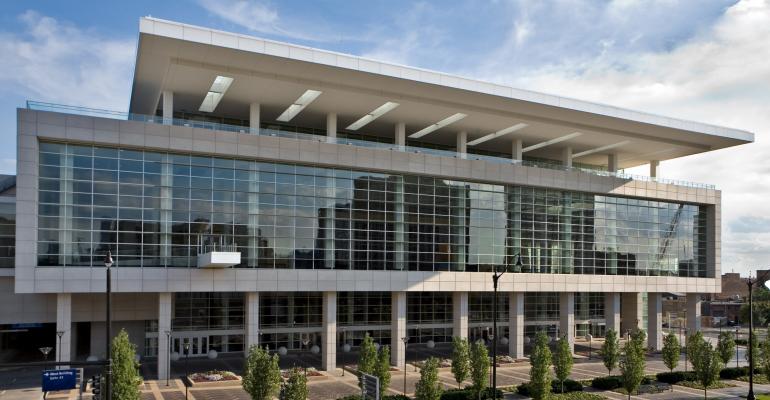 <p> The new arena will be connected to McCormick Place West (above) via sky bridge.</p>
Destination & Venue News>U.S.

The arena is part of the $841 million McCormick Place Entertainment District, a plan announced in May to redevelop the area around the convention center, including the historic Motor Row District, west of McCormick Place West. Along with the arena there are plans for a 1,200-room headquarters hotel, a 500-room mid-market hotel, dining and entertainment venues, retail shops, and streetscapes.

“We have designed a light, luminous event center that we hope will be a good neighbor and a dynamic expression of the events that it will house,” said Fred Clarke, senior principal of Pelli Clarke Pelli Architects, New Haven, Conn. “Its gently arching roof, visible from surrounding buildings and streets, will tie architecture to the image of DePaul basketball and McCormick Place events.” Pelli Clarke Pelli has designed the World Financial Center in New York, the Petronas Towers in Malaysia, and the International Finance Centre in Hong Kong.

The arena, scheduled for completion in the fall of 2016, will be linked to McCormick Place West by a pedestrian bridge. The events center will serve three primary functions: as a general session hall for conventions and trade shows; a venue for concerts and special events hosted by a variety of organizations; and as home court for the DePaul University men’s and women’s basketball teams.

The cost of building the $140 million events center will be shared equally by MPEA and DePaul. Jim Reilly, CEO of MPEA, said DePaul’s participation will allow MPEA revenues to be invested in other aspects of the District.

“We are focused intensely on becoming and remaining the world’s leading convention and trade show destination. To do this, we must have not only state-of-the-art convention facilities; we also need this assembly hall and events center,” said Reilly. “Most of our competitors have events centers, which allows them to attract a range of shows and conventions that are more difficult for us to attract with competitive pricing. We are fortunate to have a private partner in this venture to share construction and operations costs.”

MPEA estimates the new arena will draw at least 11 new conventions and trade shows in its first four years. Shows would realize costs savings and efficiencies from using the arena with its fixed seating rather than paying to set up a large general session in a ballroom.