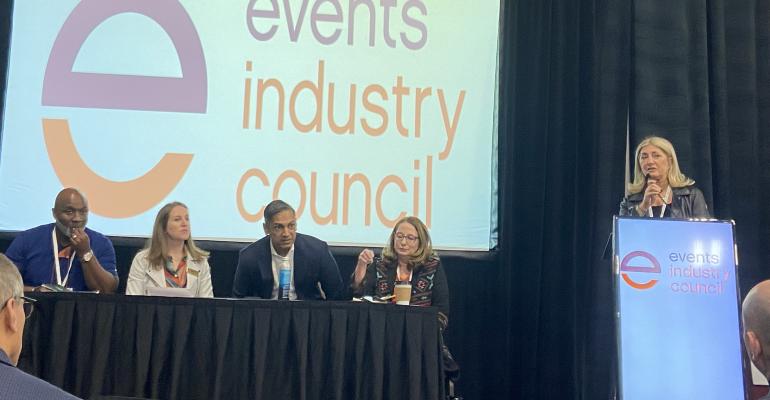 Changes include a new membership category and new learning areas for the Certified Meetings Professional designation.

Leaders of the Events Industry Council gathered at the IMEX America show in Las Vegas to share updates on five compelling changes and initiatives for the organization.

• The EIC, which celebrated its 70th anniversary in 2019, has decided on a major change to its membership, which was previously limited to the associations that serve the events industry. The umbrella organization is now opening a corporate membership category. Accor Hotels and Maritz Meetings & Events are among the first corporate members, and Sherrif Karamat, CEO of the Professional Convention Management Association, says that the EIC hopes to grow that “significantly.”

• The EIC is in the final stages of a competency analysis for its Certified Meeting Professional designation. In conjunction with a survey, which is just being launched, the insights from the analysis will guide an update of what will be expected for CMP certification, said Cathy Breden, CMP-F, CAE, CEM, CEO for the Center for Exhibition Industry Research and COO of the International Association of Exhibitions and Events. Sustainability and digital technology are among the learning areas expected to be updated.

• Jason Dunn, Sr., co-chair of the EIC Equity Task Force and vice president of the Cincinnati USA Convention and Visitors Bureau, announced the completion of the 2022 Equity Benchmarking Study. The results of the study, which had 1,400 responses, confirm the lack of diversity in the events industry, Dunn said, and will help the task force develop steps to promote ethnic diversity, gender inclusivity, and equity in leadership in the industry.

• A new study titled Global Economic Significance of Business Events will be released this fall, following up on a similar study released in 2018, said PCMA’s Karamat. The study will quantify the impact of events in terms of spending, jobs, contribution to global gross domestic product, plus other metrics that show the industry as an important economic driver. The 2022 study, conducted by Oxford Economics, will have more regional data than the previous report.

• IMEX Group CEO Carina Bauer joined the EIC panel to discuss IMEX’s sustainability efforts and commitment to the Net-Zero Carbon Events Pledge, promising to work towards a 50-percent reduction in carbon emissions by 2030 and net-zero carbon emissions by 2050. She announced that by early 2023 “at the latest” IMEX will publish a roadmap for how it plans to achieve those goals. “These collaborative efforts,” she says, “whether it’s the EIC sustainable event standards or the Net-Zero Pledge, are really central to providing the framework for the whole industry, for everybody who organizes any kind of event, to adopt common standards and practices.”