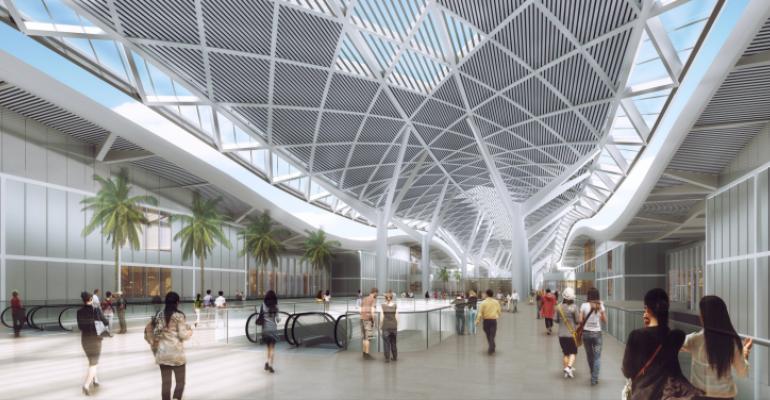 The new convention and entertainment venue in Shenzhen will be one of the largest convention centers in the world when completed.

SMG has landed the contract to manage Shenzhen World Exhibition and Convention Center, an almost 5 million-square-foot venue currently under construction near the Shenzhen International Airport in Shenzhen, China. This will be the first Asian location for the convention and entertainment venue management company, which manages McCormick Place in Chicago and the Moscone Convention Center in San Francisco among other properties. SMG will work closely with two Chinese companies that collaborated to win the bid from the Shenzhen Municipal Government to build the center: China Merchants Shekou Holdings and OCT Group. Rendering of the exterior of the Shenzhen World Exhibition and Convention Center, currently under construction.

“We are honored by our selection, which reflects our unique combination of resources, relationships, and expertise in the industry,” said SMG President and CEO Wes Westley. “While we have entertained many inquiries from China in recent years, we were waiting for the right project and partner and believe we have found both in Shenzhen.” The city, in southeast China, is about two hours north of Hong Kong by train.

The venue, which will have 4.3 million square feet of exhibition space and 500,000 square feet of flexible convention and meeting space, will be roughly double the size of North America’s largest exhibition and meeting facility—McCormick Place, which SMG has managed since 2011. Shenzhen World also will anchor a new business and lifestyle district that will include hotels, retail projects, and an entertainment complex.

The project’s first phase is slated for completion in the first quarter of 2019.

JW Marriott Skates into Edmonton, Next to Oilers’ Arena
Aug 02, 2019