/sites/all/themes/penton_subtheme_meetingsnet/images/logos/footer.png
Recent
Recent
A Restored Washington Seminary Opens as a Hotel
May 07, 2021
Industrialist Hotel Opens in Pittsburgh’s Business District
May 06, 2021
Could Your Meeting Get Lost in Translation?
May 05, 2021
LeZotte Crosses the Potomac for New Role at AMC Institute
May 05, 2021
In Event Spaces, Use Nature to Nurture
May 04, 2021
Featured
Virtual Events: We’ve Reached the Tipping Point
May 05, 2020
The Meeting Planner's Risk-Management Resource
Mar 04, 2020
The Welcome Guide: Tools and Ideas for Inclusive Meetings
Oct 07, 2019
2020 Changemakers
Jun 02, 2020
Meeting Planning Toolbox>Sustainability

Making a Difference, One Soap at a Time

Once a victim of human trafficking, Theresa Flores now works to save others like herself—using bars of soap.

Theresa Flores remembers the first time she attended a conference on human trafficking, in 2006. “I walked out of there with my life changed.”

As a 16-year-old girl from a well-to-do suburban Detroit neighborhood, she had spent two years being trafficked to men in their 20s and 30s. No one knew, not even her parents.

Today, Flores works to save others from what happened to her. One initiative she started is S.O.A.P (Save Our Adolescents from Prostitution), which raises funds for bars of soap, labels them with the National Human Trafficking Hotline number, and distributes them to hotels, along with information packets including cards for the front desk and posters with photos of missing children.

“No hotel owner or manager wants this happening in their hotel and they are very willing to help,” she says. (Here's how you can work with your hotels to make a difference.) "They might not want the soap but they want the info for their housekeepers, and will keep a stash of the soaps on hand if they find a room where there’s suspicious activity. With each “outreach,” she says, two to three girls are identified. 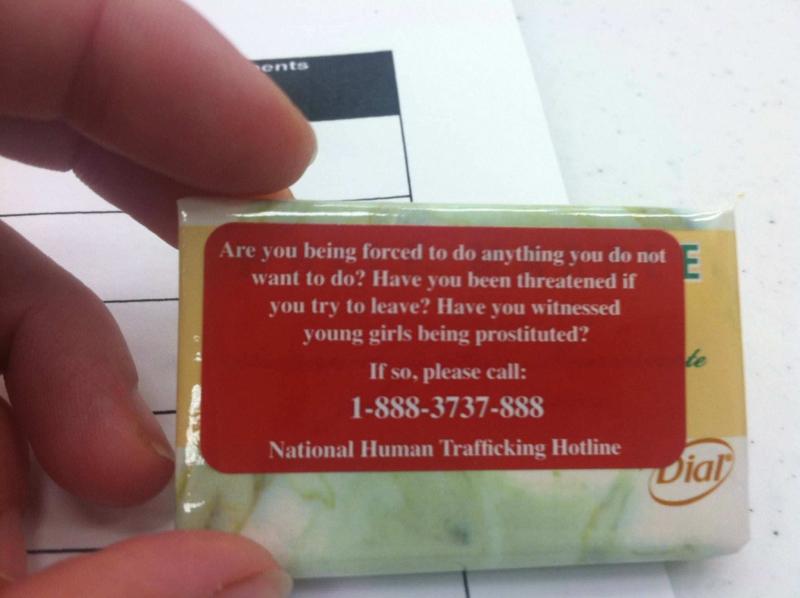 Flores works with corporations looking to do a CSR activity, including LexisNexis, which included it as part of "Global Cares Day" at its Dayton, Ohio, campus last year. First she shared her story in front of a packed auditorium and then employees worked in volunteer shifts to label the soap for as long as her schedules permitted. In one day, the group labeled 80,000 bars of soap, which were then brought to the Super Bowl. (Major sporting events often attract trafficking activities.)

"The project was received very well by our employees because they could easily connect with our anti-trafficking and Rule of Law efforts, and it was something they could do hands-on, contributing directly to help raise awareness of the issue," says Selene Martin, director, corporate responsibility, at LexisNexis.  "In  addition, hearing first-hand from Theresa (as a trafficking victim and survivor) really helped make a connection for employees, many whom are very passionate about supporting these efforts." The company plans to continue providing support and encourages others to do the same.

For the January 2014 Super Bowl, Flores is preparing to distribute 50,000 bars of soap—“and that’s just one outreach.”

Typically it takes six people 45 minutes to label one case of 1,000 bars, and volunteers also prepare the information packets. The cost? A case of soap, which can cover between three and four hotels, costs $199, including the bags, labels, and packets.