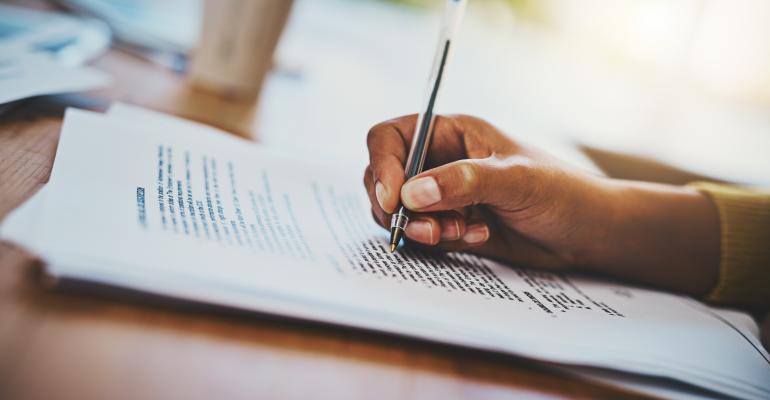 An international meetings expert shares the most important clauses for protecting your organization and attendees.

Hotel and venue contracts for international meetings are often shorter than for those in the United States, and “may often look more like a banquet event order than a legal contract,” says Terri Woodin, CMP, vice president of marketing and global meeting services, Meeting Sites Resources. However, just because a contract is short and easy to read, it is not necessarily a cause for celebration. According to the international meetings expert, planners still need to protect their organizations and attendees. During a recent MeetingsNet webinar, Woodin laid out her must-haves for international contracts.

Bring Your Own Contract
Woodin suggests that meeting planners have their own contracts that can be tailored to fit each event, instead of making changes to the hotel’s document. Include important clauses within the contract rather than in addenda so that the venue reads them as part of the legal agreement and not as afterthoughts.

Document Format
If the venue is in a destination where English is a second language, have the contract printed in both English and the local language, side-by-side, so that during negotiations planners and representatives are literally on the same page. The venue representatives will speak English, but seeing both languages will help them recognize if there is confusion over terminology.

Obligations to Perform
Woodin says, “In the U.S., we have indemnification clauses for both parties, but that’s not typically in international contracts.” Include a breach by hotel clause that says you expect the hotel to perform as agreed upon. Woodin says, “It’s a red flag if the hotel wants to take the breach by hotel clause out because it is basically telling you they don’t think they can perform before you even get onsite.”
She suggests including a process for dispute resolution. For example, in your attrition clause, have a paragraph that obliges the hotel to do an audit to compare room pickup to your registration list to make sure all the rooms are captured.

Name That Room
Add a column with the name of the meeting room to the contract so that you have a record of exactly which rooms you have booked, and when. Also, Woodin likes to add a clause so that the venue can’t switch your meeting room without giving you prior notification and approval.

Example: “In the event that the room originally designated for such function shall be unavailable or inappropriate, the room may be changed with prior written approval from the Group.”

Sizing Up the Rooms
List room sizes in the contract in both square meters and feet. Almost everywhere except the U.S. uses meters, and planners accidentally booking in square meters could end up paying for a room that is much too big.

Room Block Clauses
Woodin says resell and rebook clauses can protect your organization in the event that your group can’t meet its room block obligations.
Examples:
Resell clause: “XYZ Hotel shall use its best efforts to resell any unused or canceled guest rooms. All revenues derived from hotel’s resale of such guest rooms will be applied toward payment of any guest room attrition fee payable hereunder.”
Rebook clause: “ABC Corp. has the option to apply 75 percent of attrition damages to a future meeting at the XYZ Hotel if booked within X amount of time.”
If the hotel insists that the rebooking needs to be within a very limited time period try to negotiate an extension to when you know the organization will be returning to that city, Woodin suggests. Help the hotel to resell rooms by keeping it up to date on your registration numbers and providing as many opportunities to resell as possible.

Calculate the Currency
Fluctuations in exchange rates can significantly increase the cost of your event. Woodin advises planners to determine an exchange rate and fix it in the contract. If the venue refuses, ask for a rate range so that there is an upper ceiling on the amount planners will pay.

Does Your Platform Take Pesos or Pounds?
To avoid paying additional fees to convert currency when renting equipment or purchasing services outside the venue, planners should consider allowing some attendees to pay in the local currency at registration. When sourcing for the event, make sure your registration platform allows attendees to choose a currency, particularly if your event is in the European Union and some attendees will be from countries that use the euro.

Set Up Times
List the start time and end time of each function, including set up, on the contract. Woodin says international destinations take the contract time literally. That means, if you need a room to be ready for a 10 a.m.event, book the room from 8:00 a.m. to account for set up otherwise you will be setting up as attendees are arriving. While U.S. hotels are more likely to allow a 24-hour hold on a room to avoid labor costs for resetting it, international hotels will frequently want to keep the space in use, so planners may need to build in setup time each time they use a room.

Distractions and Disturbances
Woodin rarely sees clauses on disturbances and distractions in international hotel contracts, but recommends adding them. She says, “If the hotel is renovating the employee cafeteria, it may not materially affect your room. However, construction next door to the ballroom may be a huge distraction for your attendees.”
Example: “Hotel shall ensure that Group’s use of all function space is free from outside distractions, disturbances, and interruptions. Hotel shall avoid assigning any function room(s) adjacent to or across from Group’s function room(s) any group which may generate noise sufficient to detract from Group’s function. In the event that Group function space is disturbed despite these efforts, upon notice from Group, Hotel shall respond immediately to cause such disturbance to cease.”

Room Rental Fees
Woodin warns that in a compressed market when multiple groups are requesting the same dates, the hotel may ask for a room-rental fee. If you really want that venue, you may have to pay it, but she suggests asking if you can negotiate a higher F&B minimum to waive the room rental fee. (See caveat in next point.)

Do the Math on Minimums
Venue revenue managers may assign an F&B minimum based on your group’s square footage. Do the math! Woodin urges planners to add up the exact amount that translates to based on the range of expected attendees. She says, “You could order shrimp and lobster for everyone and never hit the minimum if you are not careful!”

Woodin’s final piece of advice for planners is, “Always be willing to walk away and use another hotel that will work with you.”

More tips from the Woodin’s webinar: